Robert Farquharson – but did he want to die?

Robert Farquharson was convicted of killing his three little boys by driving them into the dam and letting them drown inside the car. Farquharson insists he blacked out, it was a terrible accident. The prosecution insisted it was deliberate. But, if so, did he intend to die with them?

It was a terrible tragedy. Three little boys dead, drowned inside the family car at the bottom of the dam. Their father managed to get out but couldn’t save the kids. Chris Brook’s book, Road to Damnation, is the result of two years of research and investigation, in which the prosecution case is shattered. (See our overview, and three exclusive extracts: extract 1, extract 2, extract 3)

Brook applies his legal and scientific training to show how the evidence in the case went off the road as disastrously as did that family car, from feeble scientific evidence to an incompetent reconstruction. 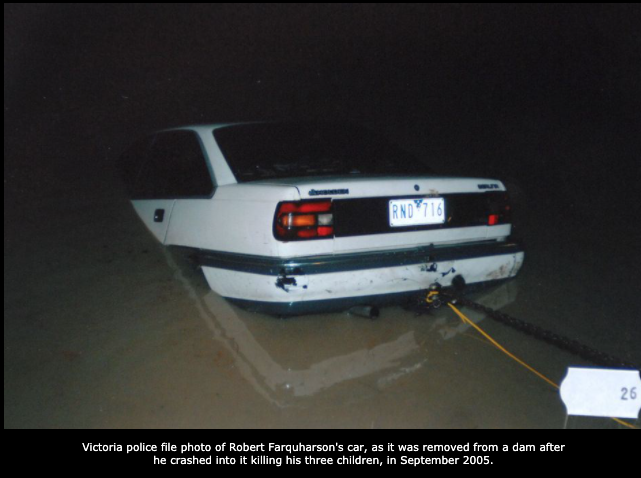 The prosecution’s case crashes into the logical ramification of its own scenario: if Farquharson intended to drown his children by driving the car into the dam, how could he be sure he’d escape alive? He barely did … So did he intend to die with them? It was a factor that, in my opinion, should have prevented the prosecution case going forward at all. It was certainly a dilemma for the prosecutors when they did.

Brook explains: “The prosecution did hedge their bets a little bit on the suicide scenario but did not really run with it. They did lead some evidence that Farquharson was depressed about the (marriage) break-up. But the issue with the suicide scenario is that most of the evidence they were leading did not make any sense in that scenario. So if they ran the suicide scenario, they had to admit that Greg King´s testimony was totally wrong, in agreement with defense arguments. The prosecutor needed that evidence. They also had to explain the cough syncope episodes and story, because that would have needed planning. So the prosecution would have had to admit that he suffered from cough syncope but then say “oh, but he didn’t actually have it on that night”. Further, the path of the car was a very strange one for a suicide attempt. How or why did he choose a path that made it look like the car was not being steered? Why not just drive toward the dam?

* Dr Robert N Moles, Adjunct Associate Professor, College of Business, Government and Law, Flinders University of South Australia. The book Road to Damnation is an excellent analysis of a potential wrongful conviction case. There is no doubt the underlying circumstances arise from a terrible tragedy – the deaths of three young children. But is it possible that our instinctive response to such an awful calamity has caused us to mis-read the circumstances giving rise to it?

Using the tools of scientific and psychological research, Chris Brook argues that to be the case. His calm, careful and skilful deconstruction of each of the damning elements of the case has caused me to reconsider my confidence in the conclusion arrived at by the jury.

Anyone who works in the area of wrongful convictions, or is interested to learn more about the circumstances giving rise to them, will benefit by reading this book.

Is it possible that the ‘suspicions’ caused us to misread the science of what had happened? Or did the reaction to the event itself cause people to reconstruct the circumstances to support the narrative of ‘evil intent’?

Whatever your view as to the correctness of the outcome in this case, everyone will benefit by learning more about the way in which psychology and science can have a distorting or potentially beneficial influence on each other.

The tools for analysis utilised in this book will be of great assistance in many other wrongful conviction cases.

* Andrew L. Urban, Editor, wrongfulconvictionsreport.org
The conviction of Robert Farquharson – by two juries, and recording a failed appeal – is demonstrated by Brook to be wrongful, the prosecution having relied on evidence that is not reliable, not scientifically robust and generally not probative. This is an example of the system getting it wrong, juries notwithstanding. Brook has convinced legal academic Dr Bob Moles for one – see above – to reconsider his confidence in the conviction arrived at by the jury.

The fact that Farquharson has exhausted his avenues for further appeal underlines the urgent need for a body such as a Criminal Cases Review Commission, which could, if requested by Farquharson, review his case. If it found good reason to refer the case for a further appeal, it would be acting to respect justice. Why is that not compelling, Mr Attorney General?

# Farquharson’s former lawyer and spokesman Luke McMahon was quoted in the Geelong Advertiser (Oct. 20, 2020) saying material in Brook’s book Road to Damnation could open the way to a further appeal under new state laws. The new laws were introduced in 2019 following urgings by Bibi Sangha and Dr Moles (see above). “We suggest that the Victorian parliament would be well advised to implement the new statutory right of appeal based on the South Australia model without delay,” they stated.

4 Responses to Robert Farquharson – but did he want to die?