Chris Brook’s new book, Road to Damnation, is the result of a two year investigation into the case of Robert Farquharson, and the science of the evidence that convinced two sets of juries that he murdered his three children by drowning them in the family car in a dam, contrary to his claim of having blacked out and losing control of the vehicle. In this our third and final exclusive excerpt Brook exposes the failures of much ‘scientific expertise’. (See our preview of the book, Excerpt 1 and Excerpt 2)

‘I think I just went over the overpass’, said Robert Farquharson in the interview recorded that night, ‘and I started coughing and um, I don’t remember anything, and then all of a sudden I was in the water’. 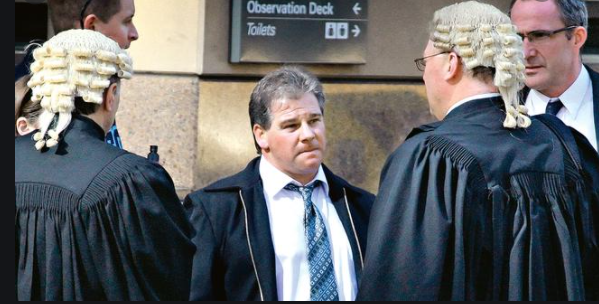 Like his story of not being able to get the kids out of the sinking car, Farquharson’s story of blacking out after coughing ‘provoked incredulity and scorn’. When Luke McMahon told a prominent barrister that he was looking into the Farquharson case, the barrister responded that ‘the guy had no hope going to trial with that bullshit story about passing out after coughing’.

To cough and then pass out… is that even a thing?

It turns out that there is a condition known as cough syncope in which loss of consciousness follows a violent cough or prolonged bouts of violent coughing. Could Farquharson have had the condition? The trial delved into this question and once again, the court required the help of expert witnesses. If medical evidence could show that Farquharson did not have cough syncope then his whole story falls apart, regardless of how poor was the reconstruction evidence. Perhaps this medical evidence would alleviate my growing concern that an innocent man may be ‘rotting in jail’? Not to mention the ongoing nightmares of Glen Urquhart (reconstruction expert).

The prosecution medical witness was Professor Matthew Naughton, whose credentials took 28 minutes to elucidate. Naughton was an extremely well credentialed witness indeed: the head of General Respiratory and Sleep Medicine at the Alfred Hospital, a Fellow of the Royal Australian College of Physicians, and an adjunct Professor of Medicine at Monash University. Naughton’s duties included teaching and research on top of treating patients in the hospital. Naughton has published more than 100 research studies in international medical journals, written chapters for numerous text books, and at the time of the trial was sitting on the editorial board of the American Journal of Respiratory and Critical Care Medicine, the world’s premier journal for his field of medicine.

Despite his expertise in respiratory and sleep medicine, cough syncope was not within Naughton’s field of specialty. Naughton had never had a patient with cough syncope, nor published any papers on the subject. Naughton himself stated that neurologists and cardiologists would be better equipped to answer questions on cough syncope. Compare this to scientific journals. When a study is submitted for publication, an editor assigns a referee who has published a paper on that topic. The reasons for this are clear: it is far easier to assess a study after you have actually researched the field in detail. Should not the court, and the accused, be granted the same standards as our best scientific journals?

Naughton’s expertise was challenged by the defence, but the court found him to be qualified to give expert opinion on cough syncope. This decision was upheld by the Court of Appeal who found that cough syncope could reasonably be assumed to come `within the ordinary knowledge of a specialist thoracic physician’.

Regardless, let us move on and accept Naughton’s right to give an opinion on these matters. Naughton is clearly a clever person with related knowledge; he could read the literature on cough syncope, analyse the relevant symptoms displayed by Farquharson and convey an opinion to the court.

For Naughton, this process did not involve checking the patient, for at no stage did he examine Farquharson in any manner. Rather than access to the patient, Naughton was given a summarized version of the Farquharson case file by the head of the investigation, Detective Sergeant Clanchy. This file contained all the incriminating evidence that the police had gathered, including the (flawed and misleading) reconstruction evidence, and witness evidence by Greg King that I will explore later in the book.

Of what use is reconstruction evidence in determining whether Farquharson suffered from cough syncope? This is a classic example of domain irrelevant information. i.e. information about a case that is not directly relevant to an expert’s analysis. A 2006 study showed that even fingerprint analysis can be swayed by contextual information about a crime. Various analysts were given the same sets of prints, but some were told that the suspect had confessed to the crime, whilst others were told that the suspect was in police custody at the time the crime was committed. In 17% of the cases, the analysts changed their result in the direction suggested by the extraneous, domain irrelevant information. It is for this reason that the National Research Council report on the state of forensic science recommends that forensic scientists should not be exposed to `domain irrelevant information’: information sharing between police investigators and forensic scientists creates the strong possibility of unconscious bias.

When Naughton made his report in 2005, perhaps these issues were not as well known by the law enforcement officers and the court, although one could argue that they should have been. However, Naughton himself was an editor of a scientific journal. Didn’t he understand the dangers that are posed by bias? Why did he accept this extraneous material? Why did he read it? Richard Feynman offers a possible explanation. `The long history of learning how not to fool ourselves—of having utter scientific integrity–is, I’m sorry to say, something that we haven’t specifically included in any particular course that I know of. We just hope you’ve caught on by osmosis.’

Again, compare this to scientific practice. Articles published in journals such as the American Journal of Respiratory and Critical Care Medicine include an introduction section summarizing the current state of the field, demonstrating that the author is up to date with the relevant literature. If an editor were to receive a research paper with such a shallow review of previous literature as Naughton’s report, that paper would be rejected. It is not even close to scientific standards. The literature review was not even up to University undergraduate standards. Imagine Professor Naughton setting an assignment at Monash University for his students to review the literature on cough syncope, and they read a couple of sentences? Fail! So why would he offer an opinion on a condition about which he has never undertaken a study, nor had a patient, after such scant research? Again, this lack of research was challenged by the defence but the Court of Appeal found it `goes to the weight of Dr Naughton’s evidence, not its admissibility.’

After being questioned by the defence barrister in the pre-trial hearing (voir dire), where this lack of research was exposed, a chastened Professor Naughton did read more literature prior to the trial. However, the fact that Naughton did subsequent research does not alleviate the impact of his initial report on the process of investigating and prosecuting this case. It helped to confirm the suspicions of the police regarding guilt and this can lead to tunnel vision. The extra research also did not alter the opinion that Naughton had already formed. Yet we know that people generally, including researchers, find it difficult to change their opinions once they are formed. When doing research, the idea is to gather all available information before forming an opinion.

With this deeper research, Naughton discovered that cough syncope is `poorly described in the modern medical literature’, that the cause of the loss of consciousness is `not absolutely clear’, and that the literature is mainly composed of a series of `case reports’ which he describes as `the lowest’ form of scientific evidence. Essentially, a lot of uncertainty remained (and remains) concerning the condition, as it has not been well studied within clinical trials.

These are important points that Naughton identified. When something is scientific, it does not mean that results are certain. Quite the opposite. That man again, Richard Feynman, explains that `what we call scientific knowledge today is a body of statements of varying degrees of certainty. Some of them are most unsure, some of them are nearly sure, but none is absolutely certain.’ So what is the point of science then, if nothing is certain? Doesn’t science have answers? Or do we not really know anything? Bertrand Russell said that `When one admits that nothing is certain one must, I think, also add that some things are more nearly certain than others.’

Remember, scientific ideas (or theories) are tested by experiment or by experience. The more experiments that are done, the more certain the idea becomes. Results of a particular experiment may favour an idea, but sometimes the evidence attained from that study is relatively weak. It can take a multitude of experiments, over a number of years, for an idea to gain a reasonable level of certainty. As an idea survives more and more tests, when it is shown time and again that nature accords with the consequences of the idea, then that piece of scientific knowledge increases in certainty. The certainty of scientific knowledge is a measure of how much scrutiny it has withstood.

With cough syncope, very little experimental testing has been done. There are several different ideas concerning the causes of the condition, and each idea carries significant uncertainty because they have not been subject to sufficient testing. This sense of uncertainty was not expressed by Naughton, who wrote that it was ‘extremely unlikely that Robert Farquharson suffered from cough syncope’. In his testimony, Naughton repeatedly used the words ‘extreme’ and ‘extremely’ to express his level of confidence in his diagnosis.

So, there are clear differences in the manner in which uncertainties are portrayed in the courts and in science, and the portrayal of uncertainties is a central tenet of science. Essentially courts, and police, do not require that expert reports be scientific in nature. What they request is the opinion of a scientist or other expert. What they get is the opinion of a scientist or some other expert. That is often different to requesting, and therefore getting, a scientific analysis.

Note: citations & references in the original have been removed

NEXT: Robert Farquharson – but did he want to die?