Road to Damnation – Excerpt 2 ‘An incubator of bias’

Chris Brook’s new book, Road to Damnation, is the result of a two year investigation into the case of Robert Farquharson, and the science of the evidence that convinced two sets of juries that he murdered his three children by drowning them in the family car in a dam, contrary to his claim of having blacked out and losing control of the vehicle. In our second exclusive excerpt Brook finds the tyre marks evidence corrupted by bias. (See our preview of the book and Excerpt 1)

Sergeant Geoffrey Exton took the call at the Major Collisions Investigation Unit (MCIU) of the Victoria police: a car had run into a dam near Winchelsea and three children were believed to have died. Exton called his boss, Senior Sergeant Jeffry Smith who was head of the MCIU. Smith sent Exton to the scene, to secure it and to start collecting evidence.

Exton and his team inspected the site but could find no evidence to support Farquharson’s account of an out of control vehicle. ‘Where motor cars run off the road, the driver panics and he oversteers the car, they lose control and we see those marks regularly on our roads… We set up lighting and didn’t find any marks, and that concerned me greatly…’

Exton spoke with Cindy Gambino’s new partner, Steven Moules. Moules told Exton what he knew, and that `I smell a rat. Something is not right here’. By this early stage, Exton suspected murder.

Meanwhile, Senior Sergeant Smith went with Senior Constable Courtis to Geelong hospital to interview Farquharson, prior to heading to the scene. The officers became suspicious of Farquharson’s demeanour during the interview. Smith’s gut told him there was something dubious about the story that Farquharson told, that his responses to questions did not `feel right’. From the hospital, Smith rang his crew who were at the scene. Before he could say anything about his own suspicions, he was told by Exton ‘This is bullshit. He’s driven into the water.’

After arriving at the scene and making his own examination, Senior Sergeant Smith concurred with Exton that there was no evidence to support Farquharson’s account, enhancing his suspicions. By the following morning, Smith had brought the homicide squad into the investigation. He compiled a list of more than 10 reasons that made him believe it was a deliberate act of murder, and only a single reason that supported an accident. `That one reason was that no one could be that evil’. Smith said that ‘We always thought the hardest thing about convicting him would be getting people to believe anyone could be that evil.’ 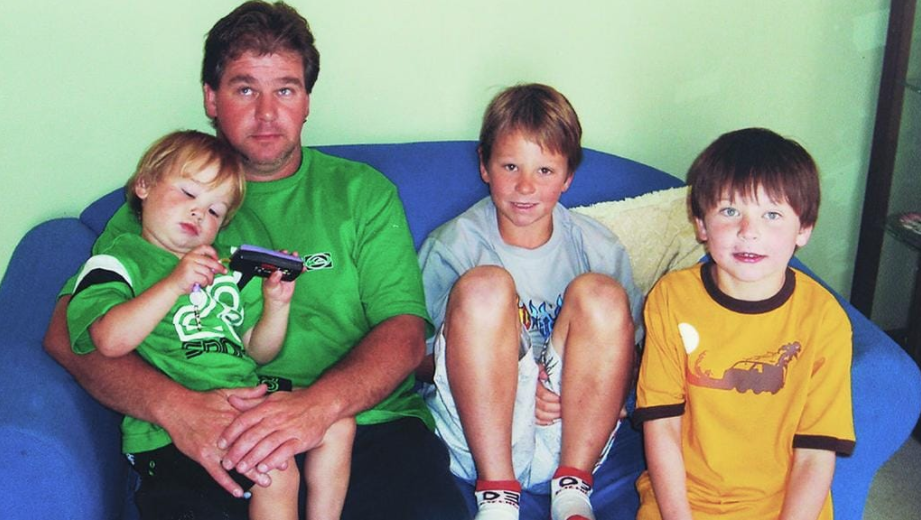 Robert and sons shortly before the tragedy

36 hours after the death of the three Farquharson boys, the case had become a homicide investigation, led by Sergeant Gerard Clanchy of the homicide squad. Along with Senior Constable Andrew Stamper, Clanchy immediately brought Farquharson to police headquarters for an interview. At the end of the interview, in which Farquharson maintained that it was a horrible accident, that he had blacked out after a coughing fit, Clanchy and Stamper both determined that he was lying. For Clanchy, Rob’s comment that he only had `two arms and two legs. I cant save three’ confirmed his gut feeling that Farquharson was `lying through his teeth.’

So Exton became suspicious due to a lack of evidence of a driver having panicked and over-corrected, even though Farquharson was claiming to have blacked out, whilst Smith and then Clanchy became equally suspicious when they thought they were able to spot a liar. From a very early stage in the investigation, there was a strong feeling amongst members of the investigation team, both within the homicide squad and the MCIU, that Farquharson was guilty.

an incubator of bias

This feeling amongst police officers that Farquharson was guilty created a serious issue with respect to the reconstruction evidence. Sergeant Glen Urquhart, the reconstruction expert, worked within the MCIU. Senior Sergeant Smith was his boss. In this particular investigation, Urquhart was working under the umbrella of the homicide squad and Gerard Clanchy. So Urquhart’s boss within the MCIU, the overall boss of the investigation, and other colleagues at the MCIU such as Geoffrey Exton, all believed that Farquharson was most likely guilty from an early stage in the investigation. The accident reconstruction work in the Robert Farquharson case was done within this environment that was inherently compromised, an incubator of bias.

‘I spent 34 years as a Police Officer and from Day One as a junior Constable I had it drummed into me that the gathering of evidence had to be thorough and completely unbiased.  If ever there was a case where this did not happen it is Farquharson’s’. This is David Axup, the defence reconstruction expert in the case. After I had analysed the reconstruction evidence, I emailed Axup to get his opinion on the evidence, how it played out in court, and what he thought in hindsight. Axup had testified that Farquharson’s car followed the slope of the terrain in a gentle arc that lead from the road to the dam. He found no evidence that the car needed to be steered to follow that path. He stood by that testimony.

But Axup is also biased, right? Toward the defence? Aren’t defence experts just hired guns? Axup had added in his reply that ‘I do not know whether Farquharson is guilty of deliberately driving into the dam.  If he is he deserves to rot in jail.’ So Axup was not sounding particularly biased toward Farquharson, and he is a former cop himself. However, bias is not always conscious. I wanted to be sure that I was not just accepting Axup’s word because it agreed with my own analysis.

Around the time I had contacted David Axup, Anne Irwin informed me that the Innocence project at Edith Cowan University in Perth had spent some time looking into the Farquharson case. I made contact and they informed me that a reconstruction expert over there, Bob Davey, had also looked into the evidence. I email Davey, who told me he had ‘looked at the case out of professional interest’ (i.e. he was not paid by anyone) and that ‘while the crash reconstruction evidence from the prosecution expert was flawed, it was only part of their case. His actions after the crash didn’t help’. So again, a reconstruction expert was telling me, without equivocation, that the prosecution reconstruction evidence was flawed, whilst at the same time emphasizing that this does not mean that Farquharson is innocent. In fact, it seemed like he thought that Farquharson is guilty.

Several months later Anne Irwin emailed to inform me that someone else was showing interest in Robert Farquharson’s case. Freelance journalist and recent law graduate Luke McMahon had been in touch with her, and was interested in looking at the evidence. The Farquharson case had formed part of his criminal law exam, and Luke had sensed that something was wrong. ‘This is bullshit’ is how he put it to me, after Anne Irwin had put us in contact. I showed Luke the research I had done, which by then had been extended to the analysis of most of the evidence in the case, and he was in. We have been working on the case together ever since. Luke has a strong sense of justice but at this point of the story, the thing to note is that he is particularly good at hunting people down and is happy to approach them. Not so easy for me, as I was living in Spain at the time.

In the files relating to Farquharson’s appeal, Luke found a report by another reconstruction expert, Dr. Shane Richardson. Richardson is a forensic engineer, who has conducted over 1000 vehicle collision investigations and has provided expert evidence in the Supreme, County, Magistrate and Coronial Courts related to collisions and incidents. He has been engaged by both the defence and the prosecution. Richardson had looked at the evidence for the defence, but had not testified in the case. Luke met with Richardson, and taped the conversation. Richardson was blunt in his assessment of the flawed evidence that helped convict Farquharson ‘How could he say this shit in court?’. Richardson explained that the prosecution ‘asserted… that the only way that that track can occur in that direction is by someone deliberately steering the vehicle’ but that ‘they haven’t actually proven that. They have asserted it. They didn’t provide enough evidence, in my opinion, that the only way that the car could have travelled that route is by steering inputs.’

Richardson’s assessment of the evidence mirrored mine. And Axup’s. And Davey’s. There was just not enough evidence at the scene to conclude that someone had been steering the car. Richardson said that ‘if you run a vehicle across a slope, and you have a change in slope, the vehicle direction will change as it runs across the slope. And that could have been the reason why you get changes in directions in the Farquharson case’.

entwined in the investigation

Richardson spoke extensively of the problems of the Major Collisions Investigation Unit and their relationship with investigating police, ‘They have obligations to their colleagues, they have interactions with the families of the victims’, and because they are so ‘entwined’ in the investigation ‘it becomes personal and… I don’t think they can separate themselves’.

Such problems of bias in forensic analysis have been well known by the legal community for a very long time. In an English case back in 1873 the judge, Sir George Jessel, stated that ‘Undoubtedly there is a natural bias to do something serviceable for those who employ you and adequately remunerate you.’

I am sorry CSI fans, but the analysis done by the investigators in the tv series is performed in an environment that is hopelessly biased, meaning that the whole premise of the show is the antithesis of how forensic science should be performed. Avoiding such compromised environments for conducting forensic work is precisely why the U.S. National Research Council recommends that forensic work is done outside the police force, and within independent research institutions. `The institutional regime of police forensics influences the preferences of forensic workers and may bias their reasoning. The institutional context creates a kind of “motivated reasoning” among forensic workers.’

Note: citations & references in the original have been removed

NEXT: Excerpt 3 (final) from Road to Damnation – ‘scientific expertise’ ?