A proven murderer? Or a catastrophic failure of the legal system?

Since her arrest for murder 13 years ago tomorrow (20/8/2022), up to the latest High Court decision a week ago, Sue Neill-Fraser’s case has moved slowly through the courts. The 2010 trial, the appeal, the seeking leave at the High Court, then a second appeal and finally seeking leave to appeal to the High Court again … a dozen jury, a dozen years and a dozen judges. Murder solved? Or a catastrophic failure?

The legal system has insisted she is guilty.# But that flies in the face of reasonable doubt, as we summarise here. So as Winston Churchill noted: The truth is incontrovertible. Malice may attack it, ignorance may deride it, but in the end, there it is.

For those of us who have followed the case over the years, we have indeed seen the truth attacked by malice and derided by ignorance. Neill-Fraser is still in prison (for now), despite the many prominent legal opinions that question the conviction and the 35,000 signatories to the petition who desperately want the case reviewed.

“The prospect of an innocent person being convicted of a serious crime represents a catastrophic failure of the legal system.”  The Chief Justice of England, Lord Igor Judge (1 October 2008 – 30 September 2013)

DETAILED DECONSTRUCTION OF ERRORS AT TRIAL BY DR BOB MOLES

The case features the Crown’s speculation that Neill-Fraser murdered Bob Chappell on Four Winds below deck, hauled the body up and into the dinghy bobbing up ‘n down by the yacht, and then (somehow) dumped it overboard. There was no evidence presented to the jury to support any part of this speculation.* Chappell had disappeared from the yacht. Neill-Fraser was 56 at the time and had a weak back. But worse, Chappell’s body has never been found – yet the prosecutor speculated as to what sort of injuries the body might have had. There was no murder weapon found, either. Yet the judge was silent. He is now the Chief Justice.

*The prosecutor did, however, show the jury a photo of the dinghy stained blue with luminol, a preliminary test for blood … not that he believed it was blood, he confided in the judge and defence counsel.

If the prosecution hadn’t made up that story, the jury would have been left with a void; there is no real evidence of Neill-Fraser being at the crime scene at the relevant time – the relevant time is not known – nor of really murdering her partner. (The jury could be excused for being furious with both the prosecutor and the judge … and they wouldn’t be the only ones.)

Never mind the absence of evidence, to anyone familiar with yachts or boats, then DPP Tim Ellis SC’s speculation is utterly absurd. As a seasoned yachtie tells it, none of what he was putting to the jury as to how Neill-Fraser disposed of Chappell’s body would have been physically possible for Neill-Fraser to perform. But Ellis is not ‘nautical’, neither was defence counsel the late David Gunson nor is the trial judge. Evidently, none of the jury were, either.

This is the same judge who in his summing up, mentioned Neill-Fraser having ‘intimate knowledge of the boat’ as being relevant to ‘an attempt to sink it’, but failed to mention that she had stated the boat was virtually unsinkable because of its ‘six watertight bulkheads… it can’t sink’ – and it did not sink. (She was accused of trying to sink it as part of her plan to acquire all of Chappell’s assets:  an irrational contradiction of the accusation.) It was built in New Zealand for Antarctic charter.

Further evidence revealing the blatant failures of the police investigation were provided in the Etter/Selby documents tabled in Parliament on August 31, 2021. The subjects include Police Investigation Corrupted, Accused Not at Crime Scene, Speculation Not Evidence and Appeal Court Misled.

When Neill-Fraser is ultimately exonerated – and she will be – we will look back and see the four major factors at work in keeping her in jail:

A year ago we published an article that explored this latter phenomenon, which began:
“What’s with the taboo? Every Tasmanian I’ve spoken to agrees: people feel intimidated talking openly about the Sue Neill-Fraser case, the long-running miscarriage of justice that is a weeping sore on Tasmania’s legal system. Perhaps that’s why there are no mass protests in the streets? Or maybe Tasmania’s media, also feeling intimidated, haven’t reported the malpractice, incompetence and lies that led to her conviction, as have some of their mainland peers?” Perhaps afraid of defamation action, the media has not lead the charge. (For the record, the defence against defamation is truth and/or honestly held views. That should be easy …)

Of course, there is the ever-present 50-member Sue Neill-Fraser Support Group, and I’ve met other individuals on the island who have serious misgivings about the case, and also those who are simply uninformed or misinformed about it. Some admit that they don’t know enough, but ‘they arrested her so she must be guilty…’

What do we want? REVIEW!
When do we want it? NOW!

A rally calling for an inquiry will be held tomorrow, August 20, 2022, 11 am – 1 pm at Tasmania’s Parliament House Gardens, with speakers including Rosie Crumpton-Crook, President of Support Group who will also read messages for Sue from around Australia and across the world, Andrew Wilkie MP, Federal Member for Clark, and former Attorney-General & Premier Lara Giddings. Statements will also be read from filmmaker Eve Ash and investigative journalist & author Andrew L. Urban. 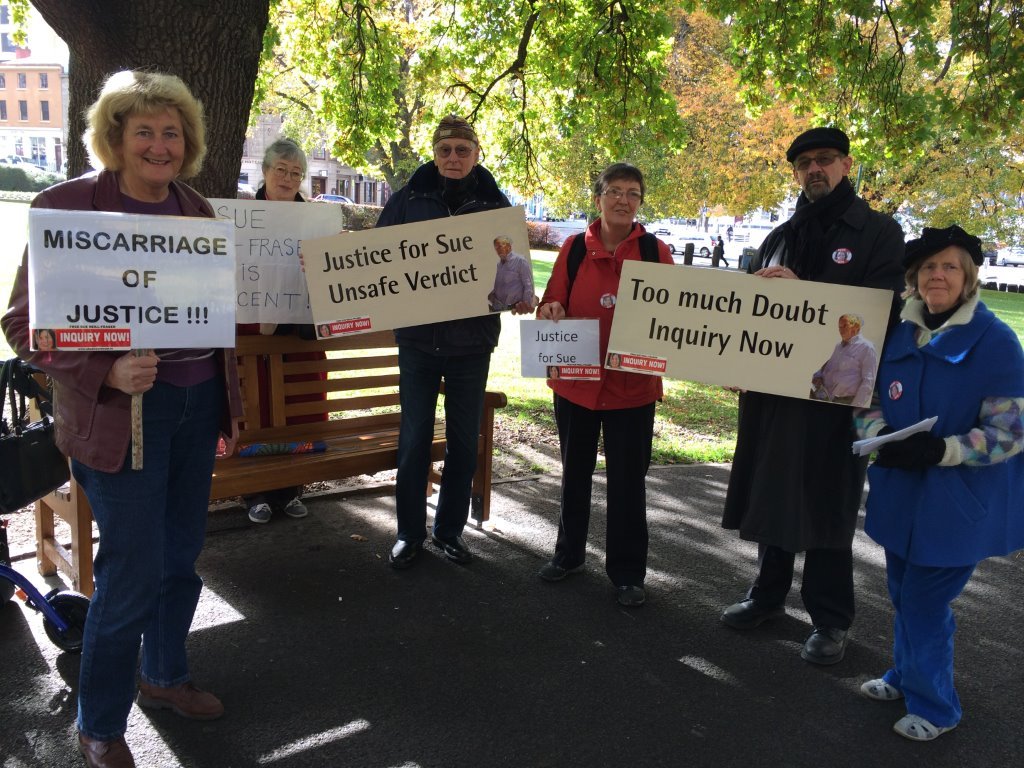 ‘just going through the paces’

One concerned Tasmanian overheard an odious remark in the corridors of Parliament concerning Neill-Fraser, made by a senior Minister, “She won’t be coming out …we’re just going through the paces.” Who is “we”, do we think?

On August 8, 2017, in the midst of Neill-Fraser’s pursuit of a new appeal, Mary Hutchinson Women’s Prison inmate Karen Keefe, who had befriended Neill-Fraser, was arrested and removed from the prison. According to Keefe, Detective Shane Sinnitt had made no secret of the fact that the real purpose of her arrest related to Neill-Fraser’s latest bid for justice, telling her, “This is not really about you, it’s about Sue,” and “It’s not even about whether she’s innocent or guilty. The state can’t afford to let her out, it’ll cost $120 million. Karen, you’re just collateral damage.”

The day on which Sue Neill-Fraser was charged with murdering Bob Chappell, Australia Day 2009, she was photographed on the quay, smartly dressed for lunch at the Royal Hobart Yacht Club with Chappell’s sister, Anne, visiting from Ecuador. Lunch at the club before a spot of brutal murder? Other than the legal reasons why the conviction should be set aside (like examples above) there are logical, common sense reasons why Neill-Fraser should never have been charged in the first place.

# Neill-Fraser and Chappell had just a month earlier arrived in Hobart with their (expensive) dream yacht, with plans for retirement cruising. Together….

# When Four Winds was towed to the wharf after being reported low in the water, and Chappell was missing, the police did not treat it as a murder but as a disappearance. Had they been thorough, they might have sought to investigate if the yacht break-ins were connected with the case; they even had the clues from Neill-Fraser’s Statutory Declaration (see below).

# In her frank and fulsome Statutory Declaration, made two days after Bob Chappell was found missing from their yacht, Four Winds, Neill-Fraser provided crucial information that can be seen as a collection of clues – but once she was targeted as a suspect, they were ignored by the police investigation. Read it for yourself. Her observations on inspecting Four Winds are exculpatory; there is no other way of reading them. For example: “… moving into the saloon I immediately noticed that the flooring was missing. This would not have floated free when the vessel flooded, it had to have many screws taken out to lift it up. Bob knew that this was a difficult job and had no reason to remove the floor. I’m sure he would not have removed the flooring. In the hole left were two screwdrivers, these were from our toolkit … – from the galley I cannot locate two knives, a Wiltshire knife is missing, this would have had a round (handle?) with a six to seven inch blade. It was originally mine, have had it a long time. Another similar knife is also missing…”

# The police all too readily accepted as indicative of murderous intent the petty crim Phillip Triffett’s outlandish claim that Neill-Fraser had asked him to kill her brother Patrick 11 years earlier, throwing him overboard. He had rushed up to the police with this claim immediately after Chappell’s disappearance while waiting to be tried on certain charges. Could him ‘helping’ help him? He had a grudge after losing their friendship when Neill-Fraser and Chappell had years earlier broken off all communications with Triffett in fear of their safety. They had then lodged a letter with police about their fears – in case anything happened to them. Triffett got in first …

Triffett’s credibility may be tested in any review which takes into account the sworn evidence of long-time Neill-Fraser friend and former business partner Bob Martyn, whose rediness to testify at trial was ignored. We have his affidavit; for example, in Par 29, he states: “Phillip Triffett’s claim that he worked on the engine of La Bacquet (once owned by Neill-Fraser) was a total fabrication. More specifically, the statement provided by Phillip that Sue had asked him to sink La Bacquet by reversing the electric bilge pump mechanism could in no way be true as the yacht was not fitted with an electric bilge pump.”

In our first report on the case on August 15, 2013, we quoted Sarah Bowles, Neill-Fraser’s daughter, making the point that the way the police and the prosecution conducted the investigation and the trial, her mother has had to try and prove her innocence. “That’s the opposite of how our justice system is supposed to work.” 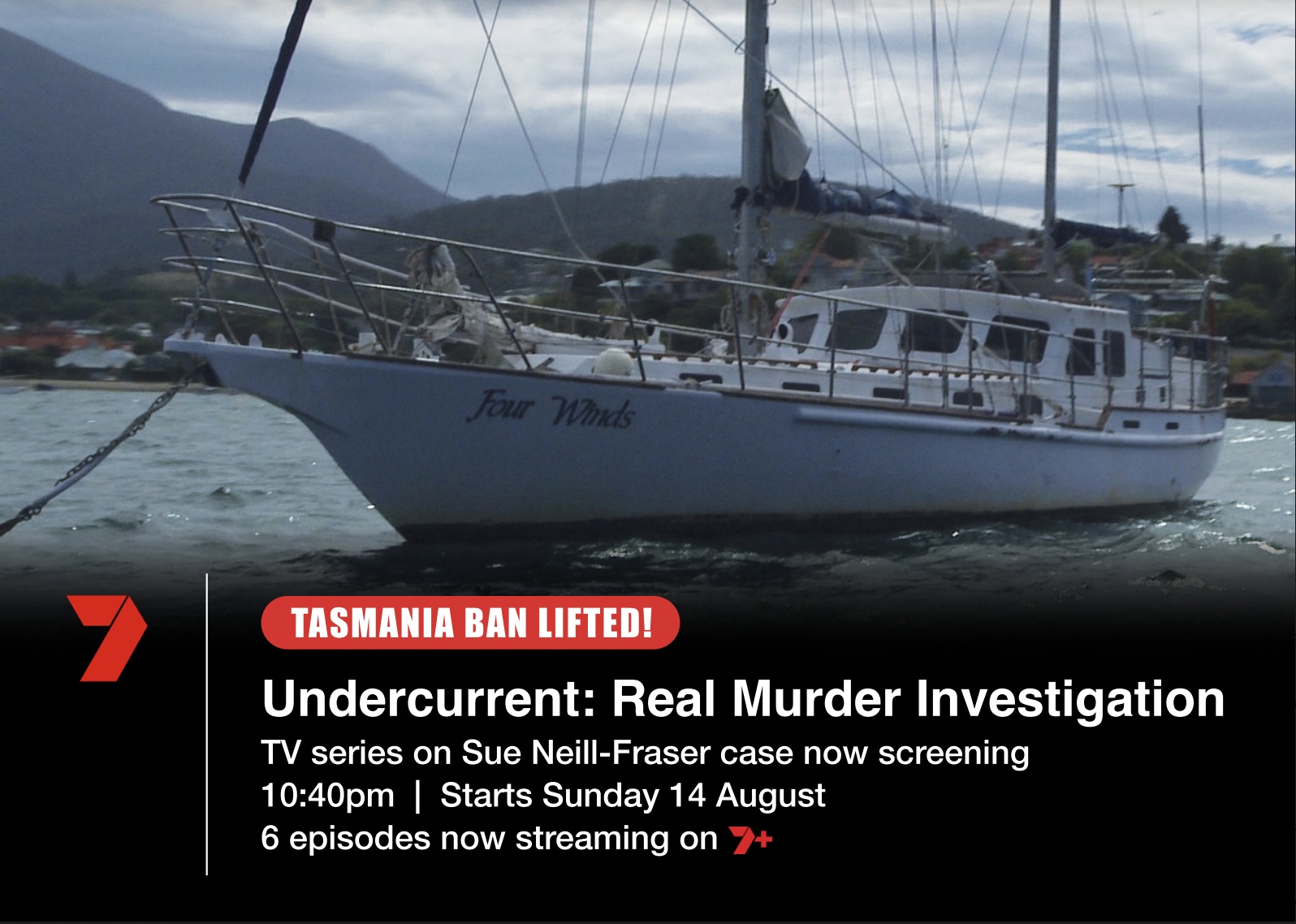 19 Responses to A proven murderer? Or a catastrophic failure of the legal system?