Red flag about the blue rag

A buzz of conversation swirled on our comments thread since the March 10, 2021 publication of our story, Sue Neill-Fraser – conviction rests on dark fantasy, raising a red flag about the blue rag from the crime scene on Four Winds, evidence that went missing …

When physical evidence goes missing in a police investigation, like the blue rag/face towel on the deck, the matter will spark speculation. Judging by the comments thread, some see it as a red flag, possibly a tampering with evidence. Why is it missing? Where is it? If there is an innocent explanation, why is it not recorded in the reports? As for example – crime scene contamination included DNA samples being linked back to an attending officer (Forensic Biology Report dated 1 July 2009 Item No. 8), a DPEM staff member (Item No. 59) and an FSST staff member (Item No. 35); the shoe impression on the knife found on the floor of the yacht belonging to a Marine Police officer; the black and yellow torch found on the boat which had been inadvertently left by police or others attending the crime scene. 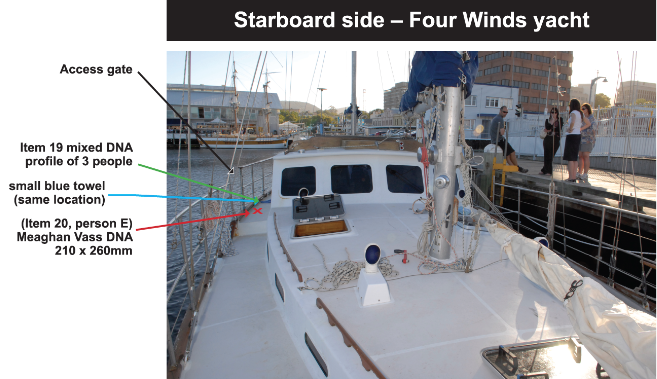 The next mention is in the McHoul ‘Forensic Biology Scene Examination Report’ 5 months later, on 12 June, 2009, page 3 of 8, in a list of items seized.

This blue towel (Item 9) is in very close proximity to two items collected at the same time:

Then, Item 9, the blue rag/face towel, vanishes from the Forensic report 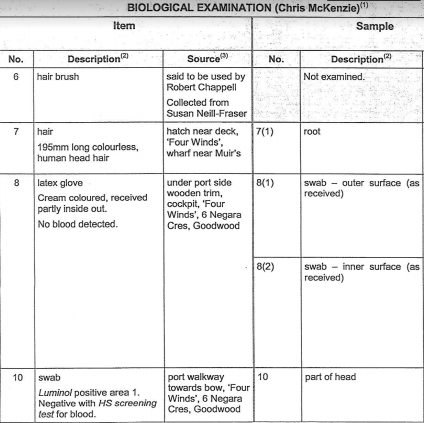 The 46 page ‘Forensic Biology Report’ dated 1 July, 2009 contains ‘a summary of the biological examination and DNA profiling results’ for the SNF case. The report omits Item 9 with no explanation. Deborah McHoul is no longer listed as the forensic scientist. Forensic scientists Chris McKenzie and Carl Grosser sign off this report.

McHoul was added as a co author of the FBR at trial.

43 Responses to Red flag about the blue rag