Jan. 6 Defendant Takes His Own Life, Died of ‘Broken Heart,’

Family says Matthew Perna, 37, was prosecuted for his 20-minute walk through the US Capitol.

Matthew L. Perna, a Pennsylvania man prosecuted for his 20-minute walk through the U.S. Capitol on Jan. 6, 2021, took his own life on Feb. 25 due to “a broken heart” and a justice system that “killed his spirit and his zest for life,” his family said 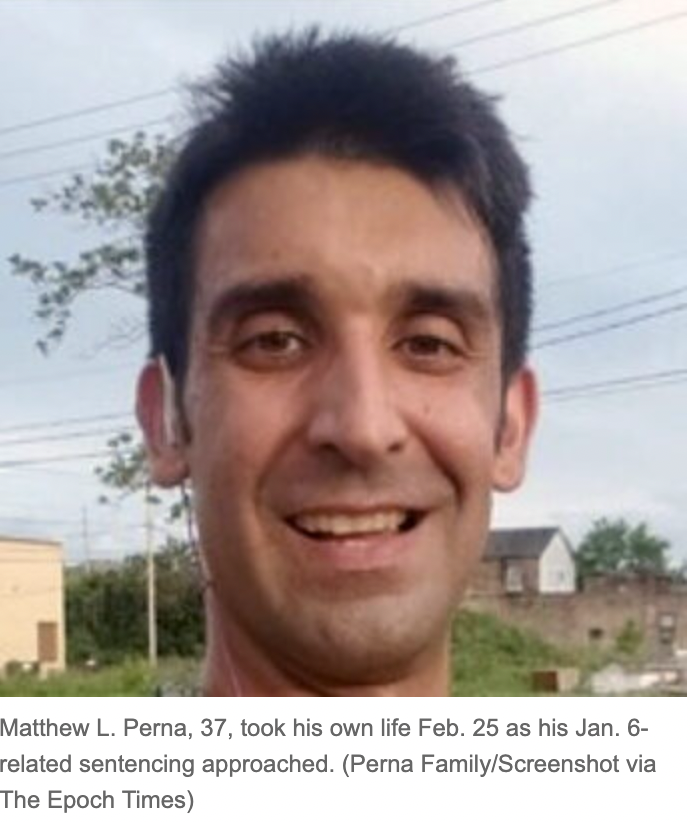 Perna, 37, of Sharpsville, was due to be sentenced on April 1 in the U.S. District Court in Washington, D.C., in a plea agreement on charges of obstruction of an official proceeding, aiding and abetting, entering and remaining in a restricted building or grounds, disorderly and disruptive conduct in a restricted building or grounds, and disorderly conduct in a Capitol building. One charge is a felony and the others are misdemeanours.

Perna learned that prosecutors would seek an even longer jail sentence based on “domestic terrorism deterrence,” Julie Kelly of American Greatness wrote on Twitter on Sunday night. “His community (which he loved), his country, and the justice system killed his spirit and his zest for life,” his online obituary reads. “He didn’t break, touch, or steal anything. He did not harm anyone, as he stayed within the velvet ropes taking pictures,” the obituary said. “For this act, he has been persecuted by many members of his community, friends, relatives, and people who had never met him.

“The constant delays in hearings and postponements dragged out for over a year,” the obituary said. “Because of this, Matt’s heart broke and his spirit died, and many people are responsible for the pain he endured.

“Matt did not have a hateful bone in his body. He embraced people of all races, income brackets, and beliefs, never once berating anyone for having different views.” Geri Perna, Matthew Perna’s aunt, said the tragedy was “beyond devastating.” “He was the kindest person you ever met,” Geri told The Epoch Times. “He was not like some of those rioters who went there acting obnoxious. No, that wasn’t our Matthew.”

The prosecutor’s sentencing recommendations have not been posted online yet. Charging documents said Perna and Stephen Ayres entered the Capitol at 2:47 p.m., nearly 30 minutes after Congress adjourned due to rioting, and nearly an hour after Vice President Mike Pence’s motorcade was seen leaving the Capitol, court records show.

Perna remained in the building for 20 minutes, filming with his phone. At one point during his time in the Capitol, a government “statement of facts” asserted on Jan. 18, 2021, Perna “became frustrated and, using a metal pole, tapped on a window of the Capitol building.” Court records do not allege that he damaged the window or any other property, or committed any violent or disruptive acts.

Prosecutors wrote that Perna wore a red Make America Great Again sweatshirt and chanted “USA! USA! USA!” while filming with his phone. Perna later uploaded an 8-minute video to Facebook, in which he allegedly said, “It’s not over, trust me. The purpose of today was to expose Pence as a traitor.” Two unnamed informants who said they were familiar with Perna called the FBI on Jan. 13, 2021, after recognizing him in videos posted online. One alleged that Perna purchased a handgun in the previous several months, court records show. There is no indication Perna had any type of weapon with him on Jan. 6, even if the informant’s allegation was true.

The second informant “believed he (Perna) was a conspiracy theorist and supported Q-Anon,” the FBI said in court documents. Prosecutors described Q as a “sprawling, discredited, anti-establishment conspiracy theory” that says the world is run by “a cabal of Satan-worshiping pedophiles and child trackers.”

Charging documents said the ‘Q’ theory is a “false belief.” Perna approached the FBI on Jan. 14, 2021, as soon as he heard that his photo was posted as No. 73 on the FBI’s Jan. 6 most-wanted list. He met with agents at his home the same day. He told them the Capitol doors were wide open when he approached the building, and that a group behind him and Ayres was pushing forward to get in. Matthew Perna went to Washington D.C. on Jan. 6 to “peacefully stand up for his beliefs,” the obituary said.

Matthew Lawrence Perna was born in March 1984 to Lawrence and Veronica Perna. He graduated from Sharpsville High School in 2002 and later earned a degree from Penn State University. He taught English to children in Thailand and South Korea, his obituary said. He traveled widely in Europe, Asia, South America, India, and around the United States. His mother, Veronica ‘Roni’ Perna, 59, died in March 2015.

One prominent Jan. 6 defendant took to Twitter on Sunday to say he understands the pressure that Perna must have felt with his case dragging on so long.

“I don’t know Matthew Perna, haven’t studied his case or accusations against him. But he’s killed himself & I understand why,” wrote Brandon Straka, the founder of the WalkAway campaign that encourages liberals to leave the Democrat Party. “I had the same thoughts many times this past year. The deafening silence of Republicans & conservative media for people dragged through this hell is unbearable.”

Straka was sentenced in January to three years of probation and fined $5,000 as part of a plea agreement on one count of engaging in disorderly or disruptive conduct in a Capitol building.

Perna’s suicide is a grim reminder of the ongoing toll from Jan. 6 and its aftermath. Ashli Babbitt, 35, was shot and killed by Capitol Police Lt. Michael Byrd just outside the Speaker’s Lobby. Rosanne Boyland, 34, was trapped under a stampede when police released some kind of gas in the Lower West Terrace tunnel and pushed rioters and protesters out, witnesses said. An unconscious Boyland was then beaten repeatedly with a walking stick by Metropolitan Police Department officer Lila Morris, video shows. One of the strikes to Boyland’s head caused her nose to bleed. Her family believes she was still alive when the beating occurred. Another strike caused the walking stick to break. She died on Jan. 6.

Derrick Vargo, 32, alleges he was pushed off the landing between the upper and lower west terraces by a Capitol Police motorcycle officer. Video shows Vargo walking along a narrow ledge outside the balustrade when he was shoved off the wall by an officer and fell some 20 feet. He suffered severe foot and spinal injuries. Vargo plans a lawsuit against Capitol Police. Dozens of defendants charged with alleged Jan. 6 crimes have been held in jail for more than a year while awaiting trial.

Inmates at the Central Detention Facility in DC have said they suffered beatings by guards, been denied food, made to march around the jail carrying their mattresses, punched for singing the National Anthem, and placed in solitary confinement for months.

The article is reproduced in full from Epoch Times, as is made clear at the by-line – without comment from me. The punishment is meant to fit the crime. This story clearly reflects the dangers of State overreach in the administration of justice; that is a threat to democracy and I am especially sensitive to such issues, due to my youthful experiences living under an authoritarian regime. 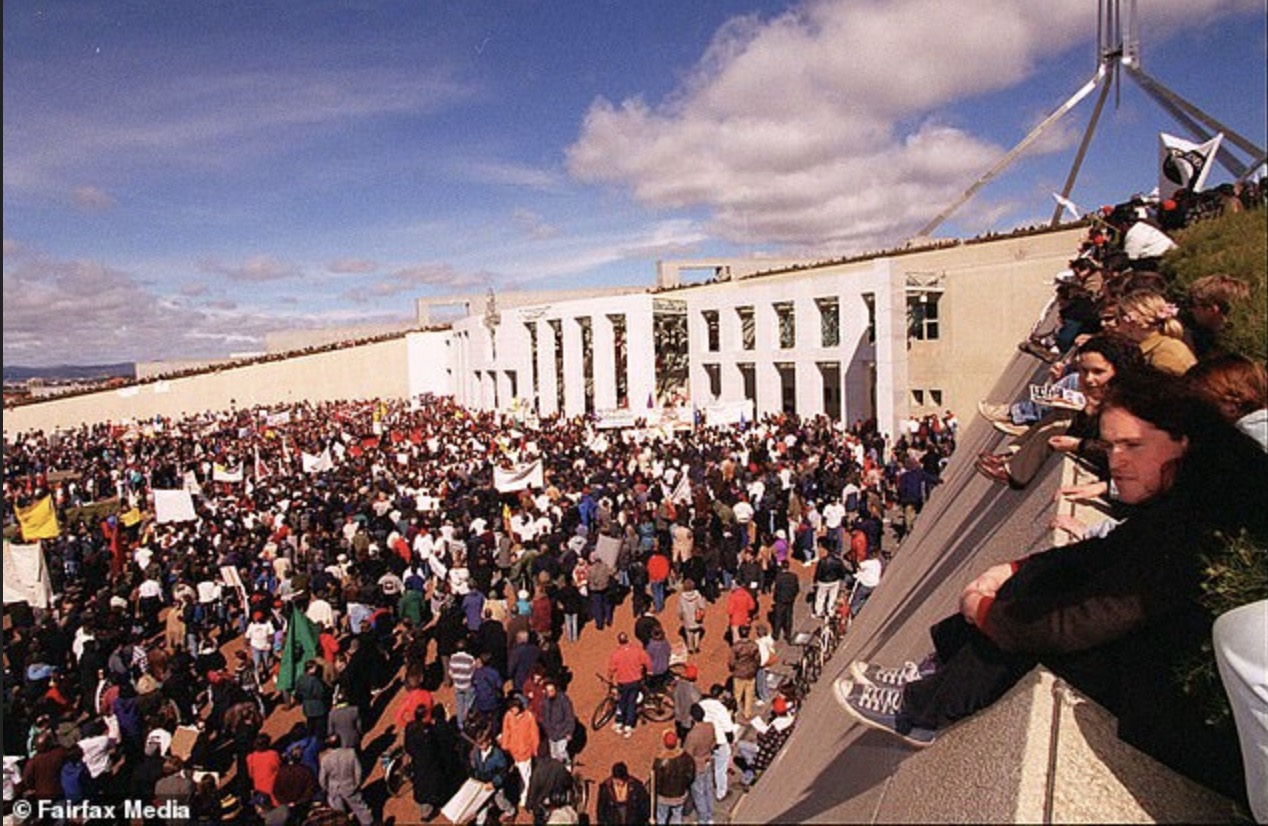 There was no such extreme response to those who set fire to the doors of Australia’s Old Parliament House in December last year (nobody is still in jail waiting for a court date) nor to those who took part in the nasty incident attacking the House when PM Julia Gillard had to be physically bustled away from danger a few years ago. “The 1996 Parliament House riot (also called the Canberra riot) involved a physical attack on Parliament House, Canberra, Australia, on 19 August 1996, when protesters broke away from the “Cavalcade to Canberra” rally organised by the Australian Council of Trade Unions (ACTU) and sought to force their way into the national Parliament of Australia, causing property damage and attacking police.”

8 Responses to Jan. 6 Defendant Takes His Own Life, Died of ‘Broken Heart,’