The conviction of Robert Xie for the blood-soaked, savage murder of five members of his wife’s family in 2009 – going against his alibi – took four trials, including the longest trial in NSW legal history for a single defendant, and over $1 million in costs to the taxpayer. In Part 1 we examined the judge’s role. The subsequent appeal (on 8 grounds) against the conviction was refused. In Part 2 we examined the role of the Appeal Court judges. In Part 3 we examine evidence that defies the conviction and thus supports the validity of Xie’s alibi.

Police and ambulance officers were first to arrive at Boundary Road after Kathy contacted 000. In the chaos, they left footprints throughout the house. By the time investigators arrived much later, the crime scene had been contaminated. They were able, however, to discern a number of prints which did not match the types of shoes worn by the first-responders. After many weeks a chart was produced with the contamination prints erased. There were 20 right-shoe prints remaining, assumed to have been left by the killer. The matching prints provided evidence for the Crown to conclude that there was only one killer.

Detective Harkins, the senior crime-scene investigator, initially found that the killer had proceeded from Bedroom1 (Min and Lily) to Bedroom2 (Irene) then to Bedroom3 (Henry and Terry). A transfer stain on the wall of B1 contained Terry’s blood. Detective Harkins was therefore confident that the killer had returned to B1 to arrange the bodies in a ‘V’ formation.After the shoe prints were revealed, they were found to proceed from B1 to B2 and B3. Detective Harkins therefore concluded that after the killer arranged the bodies into the ‘V’ formation, blood had pooled on the floor. The killer must have subsequently stepped in the blood. Nobody thought to ask Detective Harkins how long it would take for a pool of blood to form in such circumstances. Why would the killer wait around for the pool to form so that he could step into it? This one slipped past the evidence coordinator.

Detective Harkins is saying that the shoe-prints were laid down, not during, but after the killings. How long afterwards is impossible to say, but the blood from the freshly arranged bodies will take time to pool. It is perfectly feasible that, some hours later, the person who discovered the bodies was the one who stepped in the pooled blood. Recall that the Crown used the shoe-prints to (erroneously) put forward the proposition that the killer knew that Brenda was away. The evidence only says, in fact, that the person who left the prints knew Brenda was away.

While investigations were continuing (or grinding to a halt) a shoe-sole expert was called to give evidence. He was preparing to tell the court that he could not precisely identify the sole pattern. But there was an epiphany on the way to the court. He realised that said sole pattern was used for 3 models of Asics sports shoes. A flurry of activity by investigators managed to discover that Mr Xie has multiple pairs of these shoes. The rest is history.

Autopsies: weapon/s & bladders
“Many items of evidence (not least in the autopsies) point to multiple tools and multiple people involved in this killing,” says former neurosurgeon Dr Roland Zhang. But the jury didn’t hear testimony to that effect.

Dr Peter Young and Dr Roland Zhang have identified elements that contradict the prosecution’s circumstantial case against Robert Xie as the sole murderer.

The forensic report on Lily Lin contains “evidence strongly suggestive of asphyxial injury, including abrasions on the left side of the neck, extensive soft tissue haemorrhage within the neck and fracture of the hyoid bone. These are consistent with neck compression. This tells us that the neck injury cannot be caused by a hammer like object, but a short metal bar pressing on Lily’s neck.”

There are more than 10 cuts or lacerations on Lily’s face and scalp, strongly suggesting these injuries were not caused by a hammer like object. As Graham Turnbull SC pointed out (in trial 3), they could have been caused by a screw driver like object. 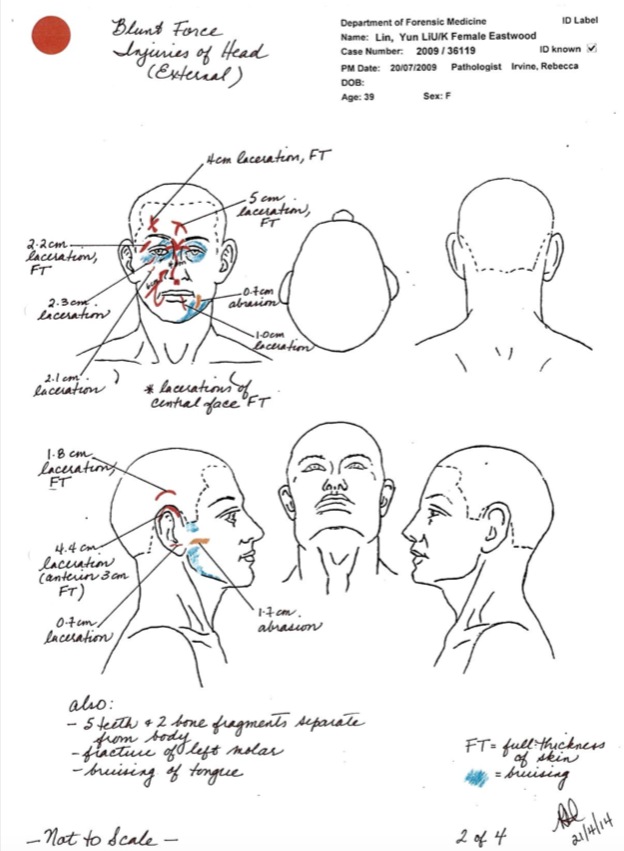 (schematic of neck injuries not shown; post mortem images too horrific to publish)

Combined with this is evidence of transferred material on the temporal bone, nasal bone and tissue displaced to the posterior pharynx and hyoid bone fracture – consistent with neck compression. “It is almost certain that a hammer cannot cause such injuries and the most likely weapon is a short metal bar-like object with one end bound with cloth to make it easier to hold”- or a chisel. “Only with this kind of weapon can the fractured bone or tissue be moved away by more than 10 cms,” as was the case according to the autopsy.

A blood-stained, folded piece of cloth and a rubber band were discovered in the boys’ room. The bloodstains, found to belong to Min and Lily, formed 4 circular patterns on the cloth. The rubber band had clearly been used to attach the cloth to the head or handle of a weapon.

Mr Webb asked Dr Irvine whether the amount of urine in a victim’s bladder could be used to determine the time of death. Dr Irvine replied that she had never heard of that being done. Mr Webb did not pursue the matter any further. Neither Dr Irvine nor Mr Webb were aware of Dr Young’s analysis given subsequently to Wrongful Convictions Report, so a useful clue was unexplored. Because we actually know the bedtimes of two victims, we can narrow down their times of death very considerably. (This will be great news for Dr Irvine.) We know from the computer specialist’s evidence that the two boys turned off their computers around a minute or so either side of midnight – preparing to go to bed.

Urine analysis from another point of view, presents a difficulty for the Crown. The amount of urine is an indicator of the time since previous urination. With some conservative assumptions and knowledge of rates of urine production in humans, the time elapsed between bedtime and death can be estimated. According to the Crown case, death occurred after 3am. Backtracking to find the bedtime for each victim, we get results completely inconsistent with the evidence.

Needless to say, urine analysis indicates times of death well before 3am. Sadly, bladder evidence has been summarily dismissed in this trial. In the words of one of the jurors: “…this should have come out, but we heard nothing”.

Secret mobile missing
It is uncontested evidence that Lily (Robert Xie’s sister-in-law) had a secret phone. It was not found at the crime scene – or anywhere else. We conclude that the killer/s took it. Why? The only possible explanation is that the contents would implicate one or more of the killer/s as having had contact with Lily. None of the surviving family members – Robert, Kathy, Brenda, the grandparents – knew the phone number. It was an established fact throughout the family that Lily did not disclose the number of the secret phone. She also refused to give out the number of her regular phone!

Hence police could not investigate the secret phone’s logs, to establish any contact between Lily and any strangers to the family. Her regular phone was not stolen. How would the killer locate the secret phone? By dialing the number.

So there is a killer who knows the secret phone number, and Robert who doesn’t. Logic dictates that we must be talking about two different people. Robert, therefore, is ruled out as being the murderer. His phone log was investigated. In any event, he would not have needed to contact Lily on a secret phone; their relationship was, of course, legitimate and open.

FIVE PUNISHMENTS OF AN INNOCENT MAN

A wrongful murder conviction has severe consequences and the criminal justice system is not known for its sense of urgency in correcting them. Our three part series on the conviction of Robert Xie is not an academic exercise; it is intended to shine the spotlight on a dysfunction in the system, which must be addressed – urgently. Our driving motivation is well expressed by the condemnation inherent in the following formulation: “The prospect of an innocent person being convicted of a serious crime represents a catastrophic failure of the legal system.”  Lord Igor Judge, Chief Justice of England (1 October 2008 – 30 September 2013).

1ST PUNISHMENT
Falsely accused of the murder of his wife’s family; 3 adults, 2 children whom he loved
2nd PUNISHMENT
An agonisingly extended (and costly) trial process involving four trials over almost five years
3rd PUNISHMENT
A guilty verdict and a sentence of life imprisonment – a life without his wife and son – upheld by the court of appeal
4th PUNISHMENT
The unwarranted lifetime stigma of child sexual abuse and the estrangement of parts of the family in shame
5th PUNISHMENT
Incarceration in prison where in addition to loss of liberty, he experiences violence and abuse as a perceived child sex offender

Respectful argument by members of the public, media and academia about matters that the High Court might examine is part of the democratic process. It cannot be imagined that the judges on the High Court bench would take exception to such arguments, insisting that they alone should be considering matters that may come before the bench. It is accepted world-over that (especially senior) judges in Western democracies are not unduly responsive to outside pressures or arguments. Especially not perceived pressure from the media.

Our exhortations in this series about Robert Xie’s conviction are not intended for their Justices’ attention but for the information of those interested in Australia’s criminal justice system, at its most error-prone.

It would surely be perverse (and highly unlikely) if any High Court judge were to take umbrage at our advocacy for Robert Xie and allowed that umbrage to reflect badly on Robert Xie’s claim to a miscarriage of justice.

Let’s remember, in R v Pell, the High Court unanimously corrected errors made in the Victorian Court of Appeal, amidst much public discussion. It is to be hoped that the High Court can do for the reputation of justice in NSW what it did for it in Victoria. No court is infallible …