The dingo took over my life – book review

Journalist Malcolm Brown managed to irritate both sides: the Northern Territory Police (and Government) as well as Stuart Tipple, the lawyer for Lindy and Michael Chamberlain, which makes the two men ideal co-authors of Tipple’s journey through the history-making case of 9-week old Azaria Chamberlain’s 1980 disappearance at Ayers Rock (Uluru) and Lindy Chamberlain’s wrongful conviction of her murder.

The media coverage of the Chamberlain case played a significant role in the case, which riveted Australia – and later the world – and split the public and the media in two. The dingo took her baby … or she is an evil murdering mother. Some members of the public sent cruel and accusatory letters … and then there were the nutters.

Now we know the truth, but it took three decades for the final closure, the fourth coronial inquest, with NT coroner Elizabeth Morris finding that yes, the dingo took her baby.

While this is not the first book on the case, it is the first told from their lawyer’s perspective – presented by a journalist who was not always ‘on board’ the innocence train. It provides some tension and some anecdotal entertainment in a gripping tale told chronologically. It is a valuable addition to the massive trove of archival material and other books that do to this case what forensic scientists failed to do: reveal the truth.

The book also provides insights into the personal costs of the main players, notably Lindy and Michael – and of course, Stuart Tipple.

Eventually, the Morling Royal Commission examined the wrongful conviction; Morling said he put the onus of responsibility for what amounted to a disaster in the legal system squarely on the shoulders of the Crown forensic experts. The Crown’s experts had come with lengthy credentials … that was misleading.

It was the view of Counsel Assisting, Chester Porter QC, that the system was crippled.

The traditional catchcry was: “It is better that 10 guilty men go free than an innocent man be convicted.” But the innocents were convicted, in the face of what, even at the time of conviction, was reasonable doubt. The judge saw the doubt, the jury did not. Chester Porter, commenting on the Chamberlain case, was quoted in July 1990 saying that the prospect of an innocent person being convicted “could easily happen again”. He said nothing had changed since the case. He was critical of the judicial system and the gathering of forensic evidence in Australia. Morling’s call for a National Institute of Forensic Science had been ignored. “The main reason the Chamberlains were convicted was because of bungled forensic evidence,” he said. And the evidence needed for a court of criminal appeal to reach an acquittal was too stringent.

By then, of course, the convictions had been squashed, after tremendous battles and official obstructions. The NT government seemed to have been more concerned about avoiding blame than about justice.

“The quashing of the convictions against Lindy and Michael Chamberlain by the Northern Territory Court of Criminal Appeal has been described as proof that our legal system works. The opposite is true. The Chamberlains finally received justice despite the system. The saga of the Chamberlains’ quest for justice showed that once the system gets something wrong, it can be incredibly difficult to turn things around. The people in control of the legal system begin to believe the system has to be defended rather than the rights of the individual it is intended to serve.”

Tipple was relieved when the convictions were quashed; but he wasn’t convinced the legal system had learnt any of the lessons.

“It’s been a wonderful effort but, will it be good enough to stop a tragedy like this happening again?”

Dr Malcolm Simons, a medical scientist, told Tipple: “It is pleasing that the role of Forensic Scientists is coming under scrutiny in the aftermath of the case. Hopefully, this will result in new standards of performance.

Of course, it did not. In 2010, some 30 years after this debacle, Sue Neill-Fraser was put through a similar ordeal – and is still in prison as a result. The parallels are damning and disturbing; not because of any similarity in the deceased – a 9 week old girl and 65 year old man. But the errors that led to the wrongful conviction and the determined, seemingly vindictive efforts by The System not to correct those mistakes afterwards. (Neill-Fraser’s final appeal is due to be heard in Hobart from March 1, 2021.)

Chester Porter QC and Stuart Tipple speaking about the Neill-Fraser case after a public Sydney screening of the Eve Ash documentary, Shadow of Doubt in 2013, organised by Eve Ash and Andrew L. Urban.

The book reveals Tipple’s disappointment tinged with disdain. He writes at one stage:

Congratulations Australia! A baby is snatched away by a wild animal and the parents are universally vilified, convicted and punished. All those years and years, collectively, of education and training, all that experience of the police offices and scientists and lawyers, all those hundreds of years in which the legal system had been studied, scrutinised and refined, all that money spent on investigation and court proceedings, and yet this happened.

The book is full of letters and telegrams between the participants (no emails as yet at the time) and personal notes. One of the notes and letters written by Lindy Chamberlain while in prison could have been written by Neill-Fraser. It underlines the impact of perceptions – by the public, by the jury – when the accused does not behave as expected.

No longer, in Australia, are you innocent till proved guilty – that is a mere myth perpetrated in the hope of keeping ‘Mr Average Man’ as gullible and trusting as he is now. Now in Australia, one is guilty until one can prove one’s innocence – but one is given little chance to do that. In Australia, a person may have a number of court appearances before they are committed on a charge. And of course, they are instructed by counsel to present a neutral face in the court, since any other is open to misinterpretation. Now when a plea of innocence is entered, and they go before a jury, the jury wonders why they do not look shocked, or penitent, or whatever emotion the jury themselves feel appropriate on being presented with the facts for the first time. The frustration of sitting listening to this without being able to answer back, added to the anger pent up over months of the same treatment, leads to an impression the jury may interpret badly, thinking it is the ‘don’t care’ attitude of a hardened person . . . 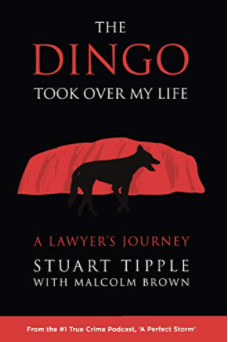 5 Responses to The dingo took over my life – book review