Three men from Baltimore, US, who were sent to prison as teenagers for a murder they did not commit have been released after 36 years. And after overturning the convictions on November 26, 2019, “On behalf of the criminal justice system,” judge Charles Peters said, “I’m going to apologise.” 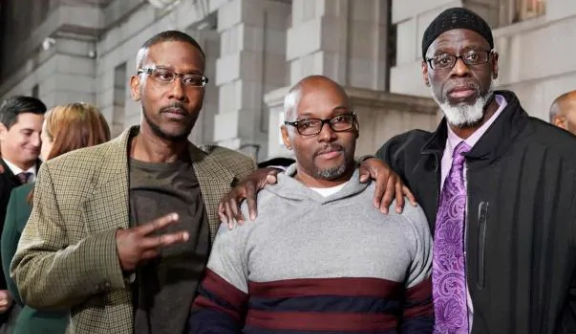 Alfred Chestnut, Ransom Watkins and Andrew Stewart on their release

As The Australian reports, the three men, Alfred Chestnut, Ransom Watkins and Andrew Stewart, were convicted of the murder of a 14-year-old boy, DeWitt Duckett, who was shot in the neck in the corridor of a Baltimore middle school one afternoon in November 1983. He was murdered for his Georgetown University jacket, detectives said. Mr Chestnut, who was 16 at the time, was later seen wearing a Georgetown jacket but his ­mother produced a receipt for it.

Police identified them as suspects and pressed for convictions, even though witnesses later recanted the testimony that implicated them, and another man, Michael Willis, was seen wearing what appeared to be the victim’s jacket. Georgetown University was popular because of its basketball team. Willis, who was 18, later confessed to the murder. He died in a shooting in 2002.

Despite being minors, Chestnut, Watkins and Stewart were tried as adults. They have maintained their innocence and Chestnut never ceased to try to overturn the case.

This year his plea was picked up by the city’s criminal conviction unit. Prosecutors found that crucial evidence that might have cleared them, including anonymous calls identifying Willis as the gunman, and misconduct in interviewing witnesses, were kept from the lawyers working on the case.

More than 2200 prisoners who were wrongfully convicted have been freed since 1989, when US courts began using DNA evidence in murder cases.

“Everyone involved in this case, school officials, police, prosecutors, jurors, the media, and the community rushed to judgment and allowed their tunnel vision to obscure obvious problems with the evidence,” said Shawn Armbrust, executive director of the Mid-Atlantic Innocence Project, which represents Watkins. Armbrust added that the case should be a lesson to everyone that the search for quick answers can lead to tragic results.

Chestnut said: “It’s a lot of guys that I left behind that are in the same situation that I’m in. They need a voice. I had an ­opportunity, by the grace of God, to have someone who heard me.”