Infamous secret Kourakis report on Keogh case to be released

The so-far secret review of the Henry Keogh case conducted between 2003 and 2006 by then Solicitor General Chris Kourakis (now Chief Justice) will finally be made public, following a far reaching decision by a trio of Victorian supreme court judges, delivered today.

The 2004 Kourakis report had been the basis of the former Labor Government’s decision to reject a petition for mercy by Keogh, who was jailed in 1995 for the drowning murder of his fiancé Anna-Jane Cheney. This despite the fact that it included a vital finding by the state’s then head of pathology, Barrie Vernon-Roberts, which was in fact exculpatory, upending Dr Colin Manock’s erroneous forensic testimony that put Keogh in jail. Indeed, this information was the basis for Keogh’s successful appeal in 2013/4.

The Kourakis review has been the subject of a long-running Freedom of Information request by Channel 7, and its former news director and Today Tonight reporter Graham Archer, author of Unmaking a Murder: The Mysterious Death of Anna-Jane Cheney (Penguin).

The contents of the Kourakis report – and why it had not been revealed – had been sought years ago, by the current Attorney General, The Hon Vickie Chapman, when she was Deputy Leader of the Opposition. Her many attempts to find out why the exculpatory information was not revealed to Keogh were all left unanswered. I reported the following exchange, from Hansard, in my book, Murder by the Prosecution (Wilkinson Publishing):

On November 19, 2015, Chapman asked then Attorney General The Hon. J. R. Rau in Parliament: Why was the report, dated 22 November 2004, of Professor Vernon-Roberts not disclosed to Henry Keogh’s legal representatives until 5 December 2013?

The Hon. J. R. Rau: I am not aware of the facts that are contained in that question as to whether they are accurate facts or not. So, I think all I can say to the honourable member is that I will take her question, I will make the appropriate inquiries and, if indeed the facts are as stated by her, I will seek to find some explanation.

Chapman asked again on December 3, 2015, February 11, 2016, March 23, 2016 and July 7, 2016, when Rau replied: If I am not mistaken, I think we have been down this track many, many times before. In fact, I seem to recall a series of questions about this going back over some months. My recollection of what I said there is to the effect that the decision, such as it was, if it was indeed a conscious decision, was a decision of a former solicitor-general. I am not aware of what was going through the mind of that individual at the time … and I still don’t know what was going through the mind of the then solicitor-general at that time. I think we are presented with certain facts. I’m always careful when the deputy leader asserts a fact, but let’s assume for the purposes of my answer that it is a fact. The facts are whatever the facts are. As for what somebody was thinking at that time, I don’t know.”

Attorney-General Vickie Chapman’s office told InDaily she had delegated the matter to her departmental CEO Caroline Mealor, “because she had an active involvement in this matter when in Opposition”.

As InDaily reports: The Seven network’s initial FOI request was knocked back, with the Attorney-General’s Department citing legal professional privilege.

But an independent Ombudsman’s review overturned the department’s decision, finding that legal privilege had been effectively waived because of detailed comments on the case at a 2006 media conference by then-acting Attorney-General Kevin Foley.

The Government then challenged the Ombudsman’s ruling through the SA Civil and Administrative Tribunal, which referred questions relating to legal professional privilege under the FOI Act to the Supreme Court, with Chris Kourakis – now Chief Justice – absenting himself from the bench to avoid conflict of interest, and three Victorian judges seconded to hear the evidence.

Henry Keogh described the decision as “momentous”. (In its report on the decision, news.com.au’s Tim Dornin refers to Keogh as “Freed murder suspect Henry Keogh..”) 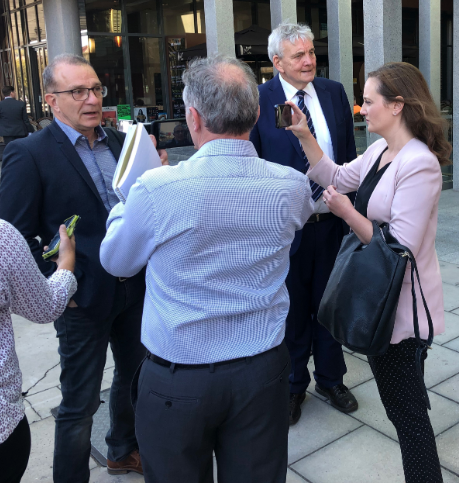