The biggest irony in yesterday’s granting of leave to appeal by Supreme Court of Tasmania’s Justice Brett in Sue Neill-Fraser’s case is that it is based on exactly the subject – the impact of DNA at the crime scene – on which the 2012 High Court leave to appeal failed. But then the High Court was not properly informed. And there are many other grounds that can be cited to overturn the conviction.

It was front page news in Hobart today. 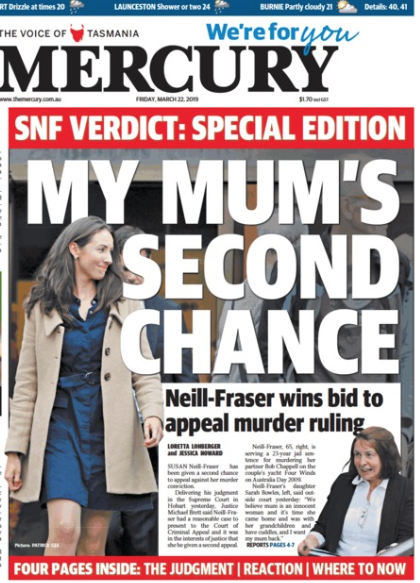 Sue Neill-Fraser’s application for special leave to appeal to the High Court was argued in the High Court on 7 September, 2012 and refused by French CJ and Crennan J. Then defence counsel, M. J. Croucher SC, argued that the finding of the DNA was a very important and powerful consideration because it pointed to a hypothesis consistent with Neill-Fraser’s innocence. There was discussion about the potential significance of her evidence with the DPP (Tim Ellis SC) arguing that there was “nothing else to connect her [Vass] or make her a remotely possible suspect except for the presence of a swab of DNA” (at page 11). Moreover, the DPP argued (page 12):
The core evidence was … she was not on the boat. She had no way of being on the boat. There was nothing credible suggested as to how she could be on the boat.”

There was no evidence whatsoever – ‘core’ or otherwise – that she was not on the boat, nor that she had no way of being on the boat.

Again (page 13):
There is just no other connection besides DNA, one piece of DNA; no fingerprints, nothing else, and a piece of DNA found in a common walkway, not in relation to the real scene of the crime which was below decks.

The DPP played down the DNA as if it were the ‘red herring’ he called it at trial. And he confused the question of what the presence of DNA meant, despite referring to it not being at ‘the real scene of the crime’: it did not necessarily mean that Vass was a suspect in the murder. It meant that Vass was present on the yacht when the murder took place – and was a likely source of eye witness testimony. Neither the DPP nor Neill-Fraser’s counsel thought to mention that the swabbed area was so large (210 x 260 mm) as to be indicative of a direct deposit by Vass, not a touch transfer – a factor that should urge further investigation. The argument by the DPP led the High Court to the following decision:

In our view, this application does not give rise to a question suitable to a grant of special leave as the applicant has not shown that she was denied an opportunity to produce evidence on a point of substance which can be shown to have had a significant possibility of affecting the jury’s verdict. Accordingly, special leave is refused. (emphasis added)

One might think that in the face of such eye witness testimony as offered by Meaghan Vass – that she witnessed the murder and Neill-Fraser was not involved – the case against Neill-Fraser collapses. But there is much more. Like pulling a loose thread on a jumper, the whole case unravels in a tangle of inadmissible evidence and prejudicial behaviour that plagued the trial.

The following analysis of the errors at trial was conducted by Dr Bob Moles, legal academic specialising in miscarriages of justice and author of several books. He is currently Adjunct Principal Researcher, College of Humanities, Arts and Social Sciences, Flinders University of South Australia. His full report on the case is available here.

Testimony of forensic scientist – inadmissible:
Luminol test results (described at trial as a ‘preliminary screening test’) should never be admitted in evidence in criminal trials without confirmatory follow-up tests which identify the substance involved. That did not happen here. There were actually confirmatory tests done in relation to the dinghy by way of ouchterlony tests but these were all negative.

This error was partly the cause of the overturning of the wrongful convictions in the cases of the IRA bombers in the UK and of Lindy Chamberlain in Australia.

At various times the witness said that it was possible for her to distinguish between a positive response (to human blood) and a false positive response (to other substances) by the quality of the glow or sparkle, and the duration of the glow. At other times she said that she could make such discriminations on the basis of her “experience”. These were the type of explanations which have been rejected in numerous previous cases. They do not accord with basic principles of scientific method. If they were reliable, then there would be “glow” and “sparkle” charts so that others could learn the technique and it would be published in scientific journals. And of course it would convert a ‘preliminary screening test’ into a ‘confirmatory test’.

Testimony of forensic pathologist – inadmissible:
This expert was asked to provide an expert opinion to the jury as to whether an older person, perhaps a bit frail, could be killed by a blow to the head with a wrench.

This evidence was inadmissible for two reasons:

A circumstantial case is one where there are no eye-witnesses. In such a case, a person cannot be convicted unless the fact of their guilt is the only rational explanation of the circumstances accepted by the jury. The law says that if there is a single rational explanation of the facts, other than the guilt of the accused, which can be derived from those circumstances, then the person cannot be convicted. 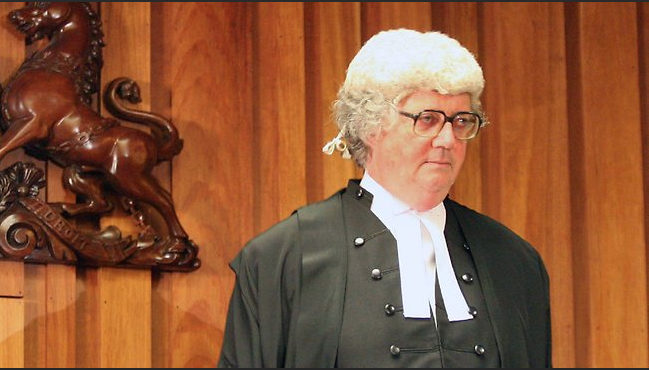 (Among other things) the judge said that it is unlikely that Mr Chappell would have tied the extinguisher to himself and thrown himself overboard. But this is based upon an assumption that this is in fact how his body was disposed of. There is no evidence to support it. The discussion of it by the judge in this way may have improperly influenced the jury.

The judge then gave a lengthy explanation to suggest that if Chappell were killed then the involvement of others could be excluded. He sought to demonstrate that the evidence supported the view that Neill-Fraser had a motive to want rid of Chappell. He said there was the money – which in fact turned out to be relatively little given the assets which Sue Neill-Fraser had available to her. He then mentioned the fact that the relationship between her and Bob Chappell was not good. In this connection he cited as witnesses, the person who had helped navigate the boat down from Queensland to Hobart; an electrician who had worked on the boat, and a diesel mechanic who worked on the boat engine. This is after a 19 year relationship. None of her long term friends or family it seemed were willing to accept there was anything wrong.

The diesel mechanic expressed the opinion that they didn’t seem to be particularly intimate. Of course, diesel mechanics are not suitably qualified experts on human relationships and should not therefore be giving such opinions. It also begs the question as to what degree of intimacy people should display when talking to their diesel mechanic about how to fix the engine. Many might think that none at all is most appropriate, and that does not indicate any intention to want to do away with your partner.

There were a great many things wrong with this. The prosecutor (Tim Ellis SC) called Neill-Fraser a liar and a bare-faced liar around 30 times. He said that things that she had said in an attempt to explain things were “red herrings” around 50 times. (See below The Duty of a Prosecutor)

The contradiction here is that much of the prosecution case was actually built upon what she had told the police in her statements. She mentioned the ropes went through the winches the wrong way round; that the fire extinguisher was missing; that there were marks on the wood which were not there previously. This led the police to assume that the winches had been used in the disposal of the body. None of this would have been picked up unless Neill-Fraser had told them about it. It was Neill-Fraser who mentioned that some blood spots on the step were not from a nosebleed. [Chappell had been taken from the boat to a Queensland hospital in December 2008 with a severe nosebleed].

So, where things said by Neill-Fraser helped the prosecution case, they accepted them willingly and without any adverse comment. Yet when she made comments which were unhelpful to their case they said that she was devious, calculating, and manipulative.

The worst aspect of the closing address by the prosecutor was when he told the jury that Chappell was most likely killed by a single blow (he suggested possibly 2 blows? See page 1392 CT) to the head by a heavy wrench. He said it would have been a big wrench because it was a big boat – as if there was some logical connection between the two.

He then added that such a method of killing Bob Chappell could only have been done by someone he was friendly with, not a stranger.

He then added that the injuries to his body would have been indicative of an attack by a friend not a stranger.

All of this in the total absence of any evidence about death, cause of death, nature of injuries – because there is no body.

He then added that the fact that the body has disappeared also indicates homicide by a friend not a stranger, because if a stranger had killed Bob Chappell – why would that person have bothered to dispose of the body? This submission is contrary to logic, common sense, and to the sure and certain knowledge of anyone who has watched any CSI programs because everyone knows why strangers dispose of bodies after killing their victims.

The duty of a prosecutor:
The important Canadian case of Boucher v. The Queen sets out the principles applying to the duty of the prosecutor in a criminal case, and it is those criteria which have also informed the discussions on this topic in Britain and Australia.

It said it is the duty of the prosecutor to bring before the court all the relevant evid­ence and to ask the jury to come to the conclusion that the accused is guilty. The overriding duty is to assist the jury. The prosecutor must not express by inflammatory or vindictive language, the prosecutor’s personal opinion that the accused is guilty. That is because, as Boucher explained, the character or eminence of a barrister is to be wholly disregarded in determining the justice or otherwise of the client’s cause, it being an inflexible rule of forensic pleading that an advocate shall not, as such, express their personal opinion of – or their belief in – the client’s case.

The purpose of a criminal prosecution, says Boucher, is not to obtain a conviction, but to lay before the jury credible evidence relevant to what is alleged to be a crime. Whilst the prosecutor has a duty to see that all available legal proof of the facts is presented, it should be done firmly and pressed to its legitimate strength – but it must also be done fairly. The role of a prosecutor excludes any notion of winning or losing.

26 Responses to Sue Neill-Fraser appeal: a menu of options