In the view of some, it seems the ‘defence’ perspective of the murder conviction of Sue Neill-Fraser is a ‘tainted view’.  Tainted with the facts, perhaps? One reader has articulated this in the comments thread under my recent article, Who killed Bob Chappell? The cops don’t know but we do…

I don’t know John Dodd, but I know he has followed the case of Sue Neill-Fraser for years, first commenting on articles I have published inTasmanian Times, now here. He has now posted this comment (Feb. 18, 2019): I can imagine if you have only seen and heard the ‘defence’ perspective you would have a tainted view of the case and the legal system in Tasmania.

The comment is symbolic of the divide between those who want a full & thorough appeal in the courts and those who think the conviction is well founded.

For context …. John Dodd was responding to the Feb 3, 2019 comment, by Anne MacKelvie: After watching the program (Undercurrent) last week and reading ‘Southern Justice’, I am convinced. I feel sorry for anyone living in Tasmania and involved in police investigations or the legal system. So much evidence seems to have been ignored. They must know the wrong person is wasting their life in jail but not prepared to accept that huge errors have been made. I hope a Royal Commission will take place.

‘Defence perspective’ and ‘tainted view’ reflect the adversarial legal system we have; these terms suggest a two sided argument, not a search for the truth. In court, and in the pre-trial investigation, the search for the truth ought to be paramount. Of course, we can say the trial presents the ‘prosecution perspective’ and is faced with the ‘defence perspective’. But courtroom theatrics and the sophistry known to be practiced by some lawyers are not immune to attack by the facts.

In the many years since Sue Neill-Fraser’s trial, there have been plenty of opportunities to examine the police investigation, the evidence offered at trial and the information coming to light after the trial. The ‘tainted view’ to which Dodd refers, may be better described as ‘informed view’, I suggest.

Not one (except obviously the DPP and his Office) has publicly defended it.

So for the benefit of John Dodd and those who agree with him, here is just a tiny sample of the facts that have ‘tainted’ my view – me holding views of the ‘defence perspective’:

Pre-trial investigation:
DNA IGNORED, THEN DOWNPLAYED
A strong sample of DNA was found in a significant deposit on the deck of Four Winds in the immediate aftermath of Chappell’s disappearance on Australia Day 2009. But the DNA, one of the most powerful tools in crime investigation, was completely ignored as police targeted Sue Neill-Fraser. Even after a match with Meaghan Vass popped up the system in March 2010, while Neill-Fraser was on remand awaiting trial, it was not regarded as vital & compelling evidence that someone was on the boat at the critical time. Not necessarily a murder suspect, but a witness, surely.

At trial, then DPP Tim Ellis SC, dismissed the DNA as ‘a red herring’. Meaghan Vass was put in the witness box but her denials of being on the boat were readily accepted and even after it was discovered that she had lied about her whereabouts that night, Ellis objected to her being recalled and the judge refused to allow it. Two years after the trial, when Neill-Fraser was seeking special leave to appeal to the High Court, Ellis told the bench: The core evidence was … she was not on the boat. She had no way of being on the boat. There was nothing credible suggested as to how she could be on the boat. (That is a laughable proposition, in my respectful and humble opinion. ALU)

The Trial:
ABSENCE OF EVIDENCE
Then DPP Tim Ellis SC speculated how Neill-Fraser murdered Bob Chappell, probably with a wrench, without producing any evidence for his scenario – ‘theory’ as the judge put it. Speculation is inadmissable.

The DPP’s speculation went a long way into ‘theory’ as this extract from his closing address shows: She’s walking backwards and forwards and delivers blow – a blow or blows, or maybe stabs him with a screwdriver, I don’t know, he doesn’t look round, and so the body doesn’t have any marks of what you’d expect if someone had come down there, a stranger, intent on doing him harm, the body I suggest would have marks consistent only with being delivered by someone who he knew to be there, who he knew and expected to be behind him.

Here the DPP not only speculates about how Neill-Fraser might have killed Chappell, he even speculates on what wounds we would see on the body – were it ever found.

The judge’s summary was highly prejudicial, reinforcing the idea of a wrench being used to kill him. 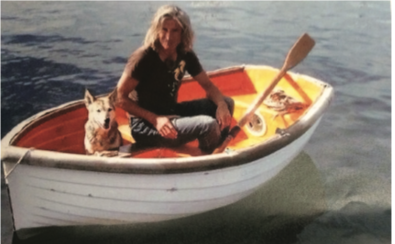 In the hearings seeking leave to appeal, it was revealed by Neill-Fraser’s legal team that a witness testifying to seeing what may have been ‘a female’ figure heading in the general direction of Four Windsjust before midnight, turned out to be mistaken. It was in fact Grant Maddock (left, in 2009), a slightly built, long haired male. Given that this sighting was the only (and rather flimsy) evidence that put Neill-Fraser on the water heading ‘in the general direction’ of the crime scene, now there is nothing at all to connect her to the crime or the crime scene.

My ‘tainted view’ is that the facts (and not just these, either) do not support the safety of the conviction.