The Etter/Selby papers reveal ‘what a difference a dinghy makes’ in the 2010 Sue Neill-Fraser murder trial – and how at the 2021 appeal, the DPP insists that the grey dinghy described by an eye witness turns white on the water. And it shrinks… (Paragraph numbers refer to the Etter/Selby papers dated August 12, 2021.)

The ‘miracle’ of the dinghy seen beside Four Winds on Australia Day 2009, as revealed in the Etter/Selby papers:

4. Mr Conde in his initial statement described himself as ‘an experienced and competent yachtsman’. His initial description was simply that of ‘a grey inflatable dinghy’. At trial, he went further and described it as a large dark grey rubber dinghy (T 2010 p.426). In cross-examination (T 2010 p.428) he said it was ‘battleship grey’.

5. In re-examination Mr Conde said that the Four Winds dinghy was smaller than the one he saw (T 2010 p.431). He also said that the dinghy that he saw had a lee cloth across its bow (raised spray guards which stop water coming into the boat in bad weather) and the Four Winds dinghy’s bow was blunter than the pointed bow of the dinghy he saw. He added (T 2010 p.431): “… the dinghy – the Quicksilver dinghy in the photographs is not the dinghy I saw at five to four on Australia Day last year.” 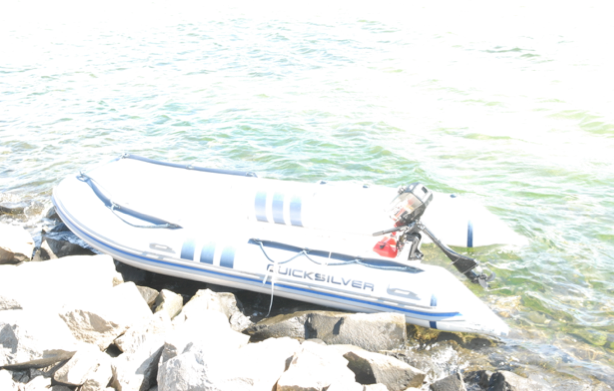 6. After Mr Conde had given his evidence at trial, he was re-interviewed by Sergeant Conroy who later gave evidence of what he had been told by Mr Conde (T 2010 pp.940-945). Mr Conde signed a five page handwritten statement to which are attached two hand drawn diagrams.  He stated, inter alia, as follows:-

ESTCOURT, J: What do you say about Mr Conde’s evidence?

MR COATES SC: Mr Conde’s evidence was that the – the yacht was grey – the dinghy, sorry was grey. Well, the answer to that your Honour, is that – which was what was put at trial, was that the dinghy was white and from a distance over the – over the water it looks grey. And, that’s the answer to that. But, it would be pretty unlikely that a dinghy similar to the Four Winds was – but, a different dinghy was there at I think this time’s around between around about 4 o’clock, and that’s the timeframe that Ms Sue Neill-Fraser said she was there.

She went there at 2 and she would have got there at – got back about 3. And, when the police put to her Mr Conde’s evidence, she said well it must have been – I must have left late. So, it’s true Mr Gun son (sic) was saying that the sightings of the dinghy was a different dinghy but, the jury can readily accepted (sic) that the same description, the only difference is one is saying white and one is grey and it’s on a – on the water. (emphasis added)

2. The DPP’s response to His Honour’s question is incorrect.