This appeal underlines the conflict at the heart of many sexual abuse cases: the conflict between a compelling, moving and credible victim on the one hand, and conflicting facts on the other. They can co-exist, with one proviso. Here is how. 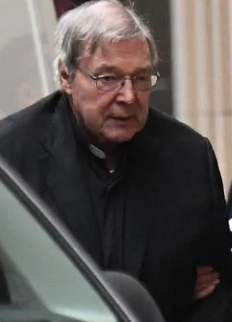 George Pell appeared on June 5 & 6, 2019, in Victoria’s Court of Appeal in his bid to overturn sex offence convictions. His legal team, led by Bret Walker, SC, says Pell was wrongly sentenced to six years’ jail for assaulting two choirboys, in 1996 and 1997, in St Patrick’s Cathedral, Melbourne. He is serving a minimum three years, eight months. The main ground of appeal is the claim the jury erred by convicting him.

“There was a significant body of evidence demonstrating, in various ways, that the offending not only did not occur but could not have occurred,” the written submission from Pell’s senior counsel Bret Walker said.

“This evidence constituted a catalogue of at least thirteen solid obstacles in the path of a conviction.

“No matter what view was taken of the complainant as a witness, it was simply not open to the jury to accept his word beyond reasonable doubt.” 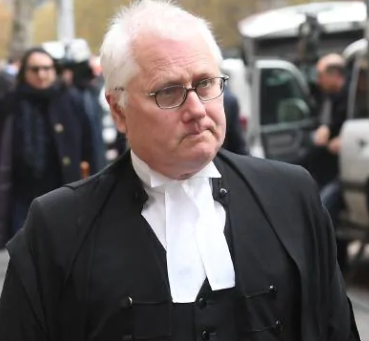 On June 5, 2019, Walker told the appeal court it was “literally impossible” for the first episode of offending in the St Patrick’s Cathedral sacristy to have occurred.

The allegation was that Pell abused two choir boys in the sacristy in 1996 after Sunday mass.

One of the boys (now an adult) gave evidence in Pell’s trial while the other died in 2014 and had denied being abused to his mother.

Responding for the Crown the following day, Christopher Boyce QC struggled mightily (and with chronically halting, speaking manner lacking in confidence, meandering and fumbled) to make a convincing case, often hearing one or other of the judges considering aspects of the claim ‘improbable’. At one stage when Boyce suggested ‘it’s a matter for the jury’, he was corrected, ‘now it’s a matter for us’. There were several occasions when the bench noted “That doesn’t help you, Mr Boyce.” He eventually apologised for spouting platitudes. He will never be accused of flowing eloquence. 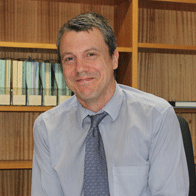 Boyce made much of the credibility of the complainant, the emotional impact of his evidence – which probably explains why the jury accepted it as true. And true it may well be, even if not accurate as to when/where it happened and who was the offender. He tried to negate the notions that the complainant was either a liar or a fantasist.

The only way we can reconcile the victim’s truthfulness – if we accept it as such – and the conflicting facts (evidence put by Walker) which make the offending physically implausible if not impossible, is by questioning the role of memory.

We can accept that the complainant experienced the offending as described by him – if we adjust the time, the place and the offender. In other words, what was described happened to him: but not when it is claimed, and not by the man convicted of it. Memory ‘overlay’ after two decades is a distinct possibility and the only answer to resolve the conflict of victim and facts. This scenario is especially plausible in a case where the then 13 year old sacristan endured a traumatic experience. Recalling it in the context of a heavily prejudicial atmosphere surrounding Cardinal Pell over a period of time, he could well have become the platform onto which such an experience was projected.

(This immediately recalls the notorious case of US Supreme Court nominee Brett Kavanaugh ‘credibly’ accused of historic sexual attack (in his teens) by Christine Blasey Ford in 2018. The accusation was not corroborated but it was ’emotionally compelling’ in the view of many.)

Before the court rose, Walker reconfirmed the evidence that Boyce had tried to dismiss, which is that Pell was at all times after the mass in question accompanied by Monseigneur Portelli – and greeting the faithful at the entrance at the time when he was accused of offending. The jury could not simply ‘put that to one side’ and that means, together with all the other matters raised at this appeal, they should have found that the case was not proved beyond reasonable doubt. 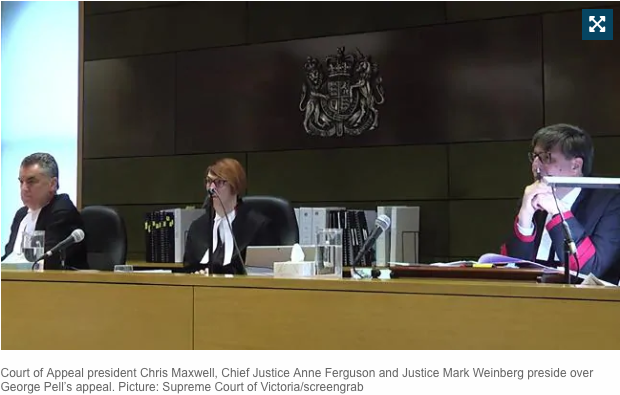 The court reserved judgement to a later date.