They call it Shaken Baby Syndrome, an outdated medical consensus that is just junk science yet it deprives parents of their living children. Last week’s tragic story of Michigan’s Tonia Miller on the online journal On Shaken Baby is another heart wrenching example of how a stubborn myth overcomes medical science. And below, author and anti-SBS champion Chris Brook reveals the secrecy that keeps the public ignorant.

Even as she went to trial in 2003, Tonia Miller says, she expected to be found innocent. She knew she hadn’t abused her baby, she explains, and, “I trusted the justice system.” Her chuckle at her own youthful naïveté is more wry than bitter.

Unfortunately for Tonia, the medical experts at the time were adamant and unanimous. Even though 11-week-old Alicia showed no bruises, grip marks, or fractures, even though the baby had been sick her entire life, with chronic collections of subdural blood possibly dating from birth, and even though no one had ever seen Tonia mistreat either her baby or her toddler, doctors testified at trial that the pattern of bleeding and swelling inside Alicia’s head could mean only one thing: Shaken Baby Syndrome (SBS). The young mother was found guilty of second-degree murder.

But those experts were wrong. 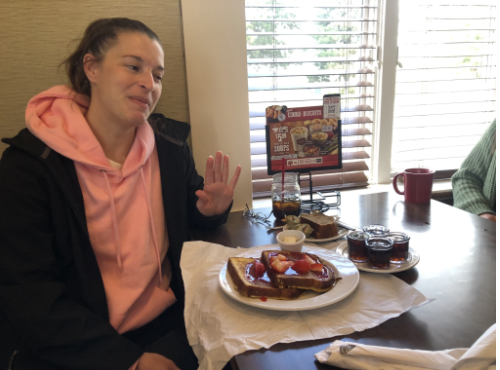 After escorting her from prison in April 2021, Tonia’s legal team took her for her first French toast in 18 years.

Tonia’s conviction was vacated in 2020, after four new experts brought in by the Michigan Innocence Clinic re-examined the medical records and concluded, unanimously, that Alicia had died from pneumonia.

“There was nothing subtle here,” emphasizes clinical law professor David Moran, co-founder of the Michigan Innocence Clinic and the driving force behind the appeal. “The pneumonia was blindingly obvious. But the presence of the triad closed down critical thinking. No one ever questioned the initial diagnosis.” Moran calls the case “an especially stark example” of shaking theory in the courtroom.

Incredibly, the autopsy report had noted pneumonia in the child’s lungs, and she’d been recovering from a respiratory infection, a well-recognized precursor to pneumonia in newborns. In the weeks before Alicia’s collapse, Tonia had sought medical help for her daughter repeatedly, with reports of weak sucking, breathing problems, and even seizures, witnessed not only by Tonia but also by relatives and neighbors.

Moran’s appeal also argued that the triad of findings—retinal hemorrhage, subdural hematoma, and cerebral edema—underpinning Tonia’s conviction is no longer considered proof of shaking. The appeal judge concluded that SBS has become “controversial” and noted “a shift in the scientific consensus.”

Dr. Steven Gabaeff, a clinical forensic medical specialist and an emergency physician for 40 years, says he finds the shift-in-consensus element ironic, because there has never been any scientific proof that the triad results only from shaking, despite the testimony at Tonia’s trial. “It was false evidence. It was never true,” he points out, “And this case proves that yet again.”

The pneumonia had compromised Alicia’s lungs, reducing the amount of oxygen available to her brain. Breathing, controlled at the brain stem, is one of the first functions to be affected when the brain is in trouble. Weak breathing can compound the oxygen problem just by itself, and on the morning Alicia was rushed to the hospital, her airways were obstructed by the formula she had apparently choked on. As detailed in the new reports, a series of natural processes readily explains how pneumonia in the lungs can lead to bleeding and swelling in the brain.

Even after her conviction was vacated, Tonia remained in prison while the state appealed the decision. She was finally released on bond in April of 2021, with the spectre of a second trial hanging over her. This fall, the state dropped all charges, and now she is free to plan her life.

Tonia seems to hold few grudges. She says she doesn’t take it personally that the relative who eventually adopted her older daughter cut off all contact—although she still hopes to reconnect with her surviving child, now a young woman. And she understands why Alicia’s father quit writing when he married: “I have to put myself in his wife’s shoes,” she says. “I wouldn’t want my husband in touch with a woman convicted of murdering a baby.”

Australian doctors continue to strongly believe in SBS, right through the system. Several more cases of guilty verdicts this year.

And it does not stop at prosecution. Many cases are run through the family court and not prosecuted, especially when mothers are accused. So they take the child and the siblings from the parents. And it is all done in secret because the family court is behind closed doors. There is zero scrutiny of the evidence given by the doctors in family court. In one case I am trying to help on, an infant was removed from parents 2+ years ago. The parents had no legal representation and agreed to the terms of removal whilst denying doing anything… they  want him back  because the 2 year agreement ended, but the state want to foster him out… in the meantime, the mother had another child… 2 hours after giving birth, DHS came to the hospital room and told her they were taking that baby as well and they took it the next day. Now they are trying to get that baby back as well. I don’t like their chances on either case… And that is not rare.

* Chris Brook is an astrophysicist with an interest in SBS and other wrongful convictions; he is the author of Road to Damnation (Clear Decks Media) examining the case of Robert Farquharson.

This entry was posted in Shaken Baby Syndrome. Bookmark the permalink.