Sue Neill-Fraser appeal to start soon – but will it end the nightmare?

Sue Neill-Fraser, 65, has never hugged her grandchildren outside prison. She was arrested# on August 20, 2009, charged with murdering her partner Bob Chappell on Australia Day 2009. We hereby mark the bleak 12th anniversary. She has always maintained her innocence (as have many supporters and several lawyers) but her nightmare has continued, as the Tasmanian legal system failed her every step of the way.* Her final appeal against her conviction is scheduled to begin shortly (March 1, 2021) but is it just a matter of ‘going through the motions’ with only local judges on the bench (contrary to accepted practice)?

Sue’s daughter Sarah and her husband Mark Bowles were planning their round the world honeymoon, cancelled at the last minute at considerable emotional and financial cost, when Sue was arrested. Their two children were born in the following tough and costly years as the family fought a system that seems prejudiced against her.

The appeal will be heard by three Tasmanian judges (Justices Helen Wood, Stephen Estcourt and Robert Pearce) who may be called on to consider matters concerning the trial judge, who is now their Chief Justice, Alan Blow AO. This would put them in a conflicted position, as a former judge has pointed out and should not happen. It doesn’t in other states.

Sue Neill-Fraser was denied bail and has been in jail ever since August 2009. At her trial the following year, she was convicted and sentenced to 26 years jail (reduced to 23 on appeal) with a non-parole period of 18 years (reduced to 13 on appeal). Sentencing her, then Justice Blow (now Chief Justice) told her she deserved an extra long sentence because she refused to tell the police where to find Bob Chappell’s body. Even the otherwise dismissive appeal court found this to be in error on the part of the learned judge and reduced the sentence and the non parole period.

Justice Blow had said: “As a result of the means that she adopted to kill Mr Chappell and dispose of his body, Ms Neill-Fraser made it necessary for the police to undertake a very time consuming investigation that involved a large number officers making thorough inquiries over a long period. In my view, the steps that Ms Neill-Fraser took on the night in question to conceal her crime and the inconvenience and expense of the investigation that she made necessary are aggravating factors that I should take into account.” The absurdity is astonishing, especially as there was no primary evidence that she killed Chappell. And it is wrong in law, as the Court of Criminal Appeal pointed out:

It is impermissible to increase the sentence in order to mark the court’s disapproval of the accused having put the issues to proof or having presented a time-wasting or even scurrilous defence.

The learned judge had also made the error of allowing prosecutor Tim Ellis SC to speculate how Neill-Fraser may have murdered Bob Chappell, without any supporting evidence. Will these appeal judges now find this also ‘impermissible’ – enough to warrant a mistrial? Or even sufficient to quash the conviction? (It is arguable that all the legal professionals in court at the trial bear responsibility for this catastrophic failure of the justice system.)

The 2020 appeal court could also find fault with the judge’s decision to side with the prosecutor – who dismissed the DNA issue as a red herring – in refusing to recall Meaghan Vass for further examination in the witness box, when it was discovered she had lied about her whereabouts on the night Chappell disappeared. It was Vass’ DNA, after all, that had been found on the deck of Four Winds, from which Chappell had disappeared. Together with the prosecutor’s impermissible speculation, is this enough to convince the judges that Neill-Fraser did not get a fair trial? 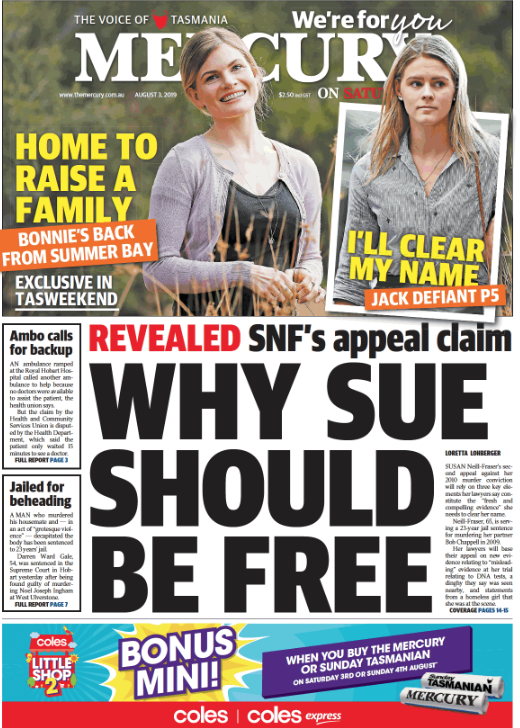 The jury, acting rationally, should certainly have entertained ‘reasonable doubt’ and the judge should have so directed.

Things had started badly: the police investigation was carried out with all the hallmarks of tunnel vision, its singular focus on Neill-Fraser, squeezing and manipulating evidence to fit her as the only suspect. It was so slapdash, the police didn’t even talk to her ex husband, then living around the corner in Hobart. For a fuller critique of the police investigation, read former detective Colin McLaren’s thoroughly researched book, Southern Justice (Hachette).

And speaking of the DNA, it is central to this new appeal, given that Vass has (since the first appeal in 2011) admitted she was indeed on board Four Winds at the time Chappell was involved in a fight with two males who accompanied Vass that night, boarding the yacht in the mistaken belief that no-one was on board. The dinghy was missing. It had been taken ashore by Sue Neill-Fraser (to meet her sister in law for lunch at the yacht club), leaving Bob Chappell to work below decks – with a mobile phone at hand to use if needed.

Vass, then a 16 year old homeless girl, was in bad company. When testifying at the trial, she denied having been on board. She didn’t say this at the time, but she had been traumatised by the incident and terrified of the consequences if she bore eye witness to what she saw. In 2018, Neill-Fraser was in court seeking leave to appeal under new legislation; Vass (almost hysterically) denied having been on board, contradicting her own affidavit. 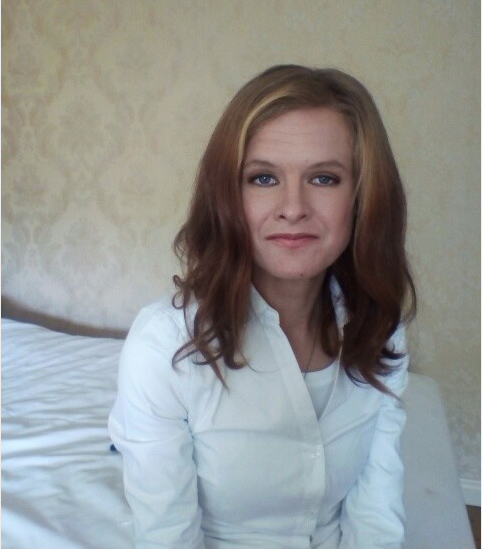 It wasn’t until March 10, 2019 that Vass finally admitted it was her and her vomit on the deck that yielded the DNA; she did so publicly on Channel 9’s 60 Minutes (the episode wasn’t shown in Tasmania) and vowed to repeat that in court when called to testify at the upcoming appeal.

That fact throws into sharp relief why the cavalier treatment of the crucial DNA evidence by the prosecution (and the judge) was so wrong. Ironic, really, given it was the only actual, primary evidence available at the trial – and it pointed to the possibility of Neill-Fraser’s innocence; a third party had been at the crime scene. The DNA may not have been that of the murderer, but DNA evidence couldn’t be just left aside.

Which brings us to the High Court’s refusal to grant leave to hear an appeal from Neill-Fraser. This was based upon the prosecutor’s dismissive claim that Vass could not have been on the boat and the DNA was not a direct deposit but perhaps something transferred on the shoe of a police officer. The High Court accepted his argument – false, as it turns out.

“It should be noted,” says Flinders University legal academic Dr Bob Moles, “that the reason used by the prosecution to support the Vass explanation that she was not there was based upon an hypothesis that the deposit of DNA on the boat could have arrived there on the sole of the shoe of a police office who had picked it up elsewhere in the vicinity of the boat. However, that explanation does not accord with the facts.

“If we call the deposit on the boat the “terminal” deposit – and it resulted from being a deposit from the sole of a shoe of a police officer, then to support that theory, the investigator would expect to find another deposit two paces away from the terminal deposit – assuming that the shoe deposit theory only relates to one shoe and not both of them. Also, the deposit terminal minus one would expect to be a more substantial deposit than the terminal deposit as with each step the material on the sole of the shoe would be diminishing. That exercise can be repeated, finding increasingly substantial deposits every two paces and which lead back to the original deposit wherever that may be.

“In the absence of other deposits at two-pace intervals, one would have to assume that the police officer landed on the boat from a helicopter, or hopped between the original deposit and the terminal deposit. Neither of which is supported by the evidence.

“Therefore, the ‘deposit on the sole of the shoe’ theory is not only unlikely or improbable, but is plainly inconsistent with the forensic evidence.”

The Office of the Tasmanian DPP could have responded to the many doubts raised in this case by the DNA at the crime scene differently.

Dr Moles notes: “in the Victorian case of Mr Farah Jamah (2008), it became clear that his conviction had been based upon misleading interpretations of the DNA in his case. Once the prosecutor had identified the fact that such an error had occurred, he took steps to ensure that the case was put before the Court of Appeal at the next available opportunity. The judgment of the appeal court was but a single sentence, ‘The Court, having read the materials filed by the parties and having considered the submissions and concessions of the Crown, is satisfied that it is appropriate to order that the conviction relating to the applicant be set aside and a verdict of acquittal be entered.” 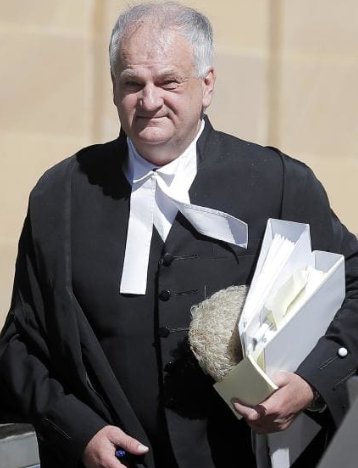 It is not the only example that should have been followed. “It was made clear in the SBS Insight program “Wrongful Convictions”, (September 3, 2019), that the prosecutor in the 2001 Queensland case of Frank Button recognized that a significant error had occurred in relation to the DNA in his case. As a consequence, the prosecutor ensured that the case was before the Court of Appeal within 24 hours. In its judgment, the appeal court judges made it clear that Mr Button had been wrongly convicted. The judgment opened with the words, ‘today is a black day in the history of the administration of criminal justice in Queensland’.

“The Court expressed approval of the fact that the DPP had put in train the necessary processes to ensure that an enquiry would take place to find out what had gone wrong.

“The appeal court judgment is but a single page – it does not cite any case-law or legislation in its judgment. It merely says that an unacceptable error had occurred, that it ought not to have happened, the fact that it did was most regrettable, and that not only must the conviction be overturned, but that everyone should know that Mr Button is innocent of this crime.”

Dr Moles comments: “As I have always said with the Sue Neill-Fraser case, with the DNA clearly indicating an error in that the trial was misinformed about the significance of the DNA, along with the manifest errors on the record of the trial (such as the absurd statements by the prosecutor) the Crown should have conceded that appealable error had occurred. Yet they prolong the farce, just as in South Australia they did with the Keogh case pretending that there is nothing wrong.”

Will Neill-Fraser’s appeal judges, Justices Helen Wood, Stephen Estcourt and Robert Pearce, regard Vass’ testimony as fresh and compelling evidence – and exculpatory – and taken together with the other failures at trial (not all of them outlined here), serve the interests of justice by quashing the conviction? Will they end the nightmare? Or, since she twice in court has denied being on the yacht, might they declare Vass an unreliable witness – just when she is telling the truth? Will the real murderer/s be sought?

Will Sue Neill-Fraser finally get to hug her grandchildren at home?

# In fact, we argue that there was never a valid, rational reason to charge Sue Neill-Fraser with murder. It is seen as irrational when applying formal logic, as outlined in a detailed 3-part analysis by Benjamin Dean.

Andrew L. Urban is the author of Murder by the Prosecution (Wilkinson Publishing), featuring the case of Sue Neill-Fraser and several others.

29 Responses to Sue Neill-Fraser appeal to start soon – but will it end the nightmare?