Presumption of guilt & other travesties in the case against Lehrmann

Bruce Lehrmann has had to move away from Canberra, change his appearance and is living in the shadows, broke and looking for work of any kind to survive. He is not on the run from the law, but he may as well be. He has not been convicted of raping Brittany Higgins, but he may as well be. While his accuser has just been paid millions by the Federal Government (taxpayers) in a controversial manner.

In due course, we may well have reported on the case of Bruce Lehrmann as a wrongful conviction. Accused of rape by fellow Canberra staffer Brittany Higgins, the tortuous history of the case included a Prime Ministerial apology in Parliament even before the case went to court and a (different, post election) Prime Ministerial comment later. Astonishingly, both Prime Ministers’ comments assumed Lehrmann was guilty. (He has maintained his innocence.) And that was just the start in a sequence of events worthy of a gripping courtroom drama, featuring reprehensible coverage (presumption of guilt echoed) by some in the media, legal officials and questionable evidence from the complainant. Some of the latter has been listed in her substack blog by Bettina Arndt, commentator on gender issues, as follows:

The missing undies
Much was made of Higgins’ state of undress, as witnessed by the security guard, which many claimed was a sure sign that she’d been brutally assaulted. But the cross examination revealed she hadn’t bothered to wear any undies for her long evening cavorting around Canberra bars. Her tight, skimpy dress showed “bad lines” if she wore knickers, she said. No panties and a skintight dress which likely ended up bunched around the waist of the drunken girl would make for a very revealing spectacle to greet the security guard’s torch.

Yet Higgins blatantly lied to Lisa Wilkinson in the prizewinning television interview telling her that Lehrmann had removed her panties. In her last day of cross-examination, she admitted that was a lie. “It was wrong,” she said. This was barely reported – because it is verboten to discuss in a rape trial what “victims” were wearing.

The dress
Higgins claimed she had kept the dress she wore that night for six months under her bed but it came out in court that she’d worn it within weeks of the alleged rape.

The panic attack
Higgins claimed she was having a panic attack and had spent hours in a bathroom dealing with her anxiety when she was actually at a farewell lunch for her former boss.

The doctors’ visits
Higgins lied to police, to friends, and to the press about attending doctors’ visits in the weeks following the alleged rape. She made multiple appointments she never kept.

The missing text messages
Higgins refused to give police her phone after first reporting the alleged rape. She eventually handed it over, but only after cleaning out messages and photos which did not support her story.

The bruise
She said she had a bruise on her left leg caused by the assault. It was not a bruise but rather a red mark, and was on the wrong leg. Somehow her photograph documenting this was originally missing from her phone but appeared on another phone some months later.

Memory lapses
After telling her ex-boyfriend about the alleged rape, Higgins initially claimed she had been so drunk she could hardly remember a thing. Soon after she was reporting the assault in great detail, including the exact position of her body, her reactions, his expression, etc.

Briefing journalists
Higgins claimed she was so bombed out on valium that her boyfriend had to distribute her briefing document to journalists, but she turned out to be the one who spilt the beans.

Support from Minister’s office
Higgins claimed to receive no support from Chief of Staff, Fiona Brown, after making the rape allegation. Yet she sent flowers and champagne thanking her boss for her support and advice, saying “You have been absolutely incredible.”

There’s evidence that the various government ministers and other staff provided assurance her job was not at risk, but she gave numerous interviews complaining about the lack of support and fear that the government would get rid of her.

Signing in
Higgins claimed she was too drunk to sign in at security and that Lehrmann had signed for her. Security claimed they saw her sign in. 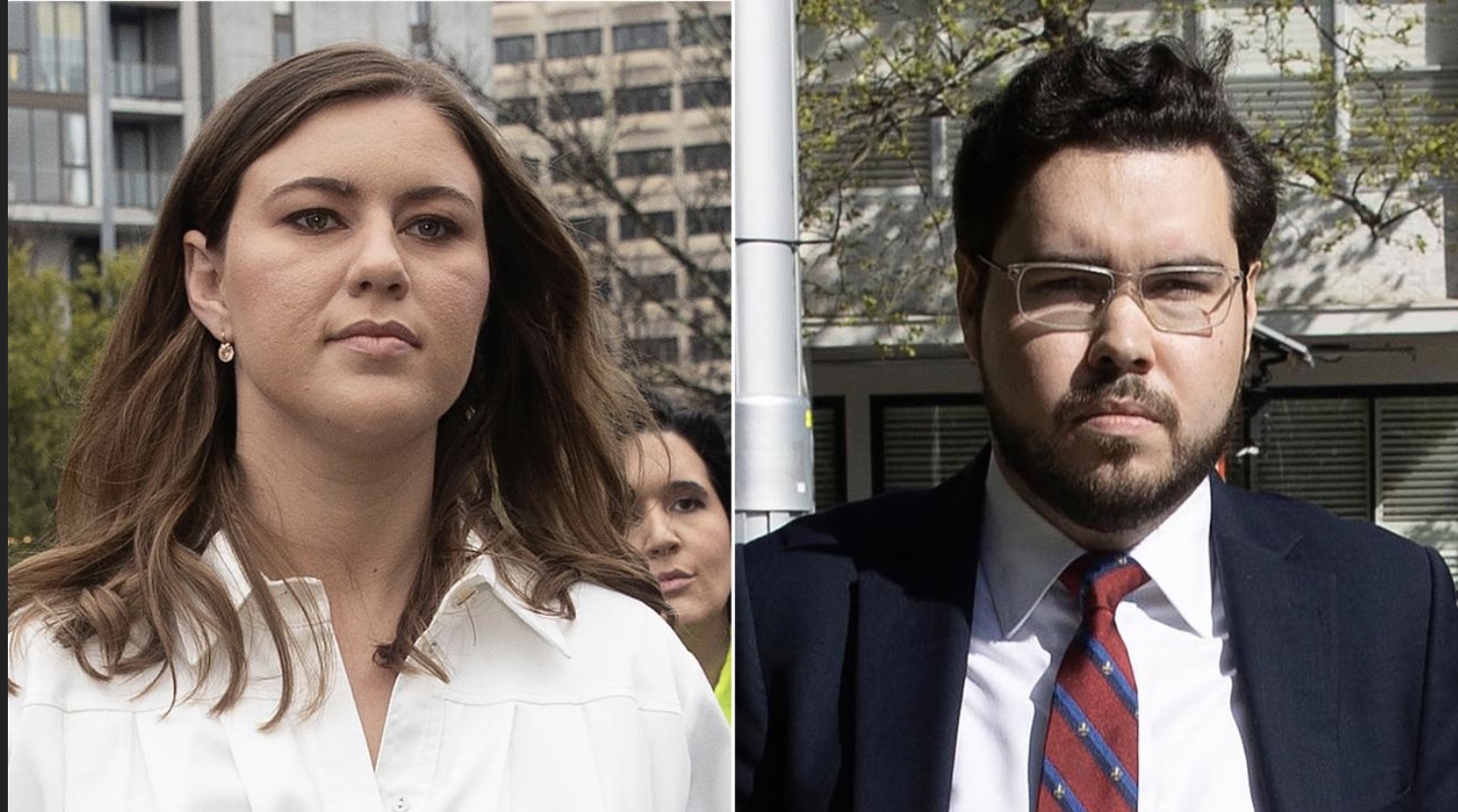 After the mistrial (juror misconduct) came the no-trial, when the ACT’s Director of Public Prosecutions, Shane Drumgold, SC, announced in public that he would not try the case again, fearing its potential negative impact on Higgins’ mental health. Lawyer and former journalist Andrew Fraser finds “The fact that police are now in the sights of the DPP himself is but one of many serious oddities in the Lehrmann case, including:

This week saw me agree for the first time ever with the AFP Association: if there is to be an inquiry, it should be into the DPP as well as the police. I agree with Waterford, too, that the AFP hierarchy must not form part of the inquiry. It appears that the Australian Commission for Law Enforcement Integrity will run the inquiry, at the referral of ACT Attorney-General Shane Rattenbury, so that won’t be a problem.

Whether police are in the wrong at all remains an if – but the deeply concerning actions of the complainant and the Director are not in doubt, in my view.

Andrew Fraser is the principal of Fraser Criminal Law and has worked in criminal law in the Canberra region for more than a decade. Before beginning legal practice, Andrew was a journalist for almost 30 years with The Canberra Times and the Sydney Morning Herald, including stints in the Federal Parliamentary Press Gallery.

There is a whole other (disturbing) story about political interference in the awarding of a financial settlement to Higgins, as outlined in The Australian. Among the points in the article, by columnist Janet Albrechtsen and NSW Editor Stephen Rice:

The Albanese government muzzled former Liberal minister Linda Reynolds in her defence against Brittany Higgins’ multimillion-dollar lawsuit, threatening to tear up an agreement to pay her legal fees and any costs awarded unless she agreed not to attend a mediation.

Ms Higgins reached a confidential settlement with the commonwealth, believed to be worth up to $3m, at the mediation on Tuesday over the former staffer’s claims she was not supported by Senator Reynolds or Liberal Party frontbencher Michaelia Cash after the alleged sexual assault by Bruce Lehrmann in Parliament House.

Senator Reynolds is understood to have been determined to defend herself against Ms Higgins’ allegations but in correspondence obtained by The Australian, the commonwealth’s lawyers told her she could not take part in the mediation. Senator Reynolds was therefore unable to dispute any of Ms Higgins’ allegations about a failure to support her or properly investigate the incident, some of which were contested at Mr Lehrmann’s trial.

The Australian understands Senator Cash was also sent a letter muzzling her and instructing her not to attend the mediation in return for her legal fees being paid by the commonwealth.

Neither Senator Reynolds nor Senator Cash was asked for evidence that contested Ms Higgins’ claims.

The taxpayer-funded settlement was revealed by Ms Higgins’ lawyers in a late-night statement on Tuesday apparently designed to minimise media coverage. Legal sources have expressed astonishment that such a complex and expensive settlement was resolved in a single sitting.

Senator Reynolds said she was unable to comment on the matter. “I did not participate in the mediation and I have not been informed by the department of the outcome,” she said.

Her lawyers, Clayton Utz, in a letter dated December 9, 2022, accused the government of seeking to hamper her ability to defend herself against Ms Higgins’ claims and of not meeting Legal Services Directions.

“We find it difficult to see how, without any further particularisation of the causes of action that Ms Higgins seeks to rely on and any evidence in support of the same, the commonwealth could possibly be satisfied of the criteria for settlement on the basis of legal principle and practice and ‘a meaningful prospect of liability being established’ in accordance with those directions,” they said.

A few points made in his column in The Australian (Dec 16, 2022) by Chris Merritt, VP of the Rule of Law Institute:

On Monday of this week (Dec 12, 2022), the legislation creating the National Anti-Corruption Commission came into effect – just in time for Tuesday’s extraordinary financial settlement between Brittany Higgins and the federal government.
It is difficult to see how the Higgins settlement complies with the longstanding rules governing the way the federal government is supposed to deal with monetary claims.
It might also come within the definition of corruption that has just been approved by parliament at the urging of the Attorney-General, Mark Dreyfus.

If the payout exceeded $100,000 – and remember, reports revealed she was seeking around $3m – the Legal Services Directions state that the government needed to obtain a legal opinion that the settlement is in accord with legal principle and practice.

So does such an opinion exist? If it does, who wrote it and how did the author conclude – based on facts that were not properly tested – that the Higgins claim had a meaningful prospect of success in a court of law?

If no lawyer was willing to provide such an opinion, the rules have a loophole that would still permit a payout – but only if there had been direct involvement by the Attorney-General. First there would need to be a declaration that the Higgins mediation involved “exceptional circumstances” and Dreyfus would then need to agree that the normal criteria for settlements should not apply in this particular case.
So somewhere in the bureaucracy there is either a legal opinion by a courageous lawyer who drew upon untested claims, or a document in which Dreyfus states that the normal rules should not apply to Higgins.

This entry was posted in Case 18 Bruce Lehrmann. Bookmark the permalink.