Society does not want prosecutors to win convictions in circumstantial cases based on speculation. It is also impermissible. If it weren’t for professional immunity, the practice would cease.

The Crown’s circumstantial case against Robert Xie relied heavily on speculation supported by unreliable and flimsy testimony from a criminal in custody working as a snitch for his own benefit. Xie was convicted of the brutal multiple murder of five members of his wife’s family as a consequence. The Crown relied on the snitch’s testimony to negate Xie’s alibi. The Crown also speculated about the time of death of the victims. There was no direct evidence against Xie.

The verdict was delivered at the fourth trial, after the third trial ended in a hung jury. By then, Xie’s resources had been depleted. Former prosecutor now defence barrister Margaret Cunneen SC argues that the accused should not have to pay the costs of litigation after a hung jury; the state should pay. “It’s not their fault the jury couldn’t deliver a verdict,” she says.

Professional immunity protects prosecutors from potential consequences of the unethical practice of using speculation to poison the jury’s mind. Some judges are alert to the danger; not all.

In Xie’s fourth and ultimate trial, the trial judge, Justice Elizabeth Fullerton, failed to challenge the prosecution’s speculation that all the victims were killed after 2am – which is the timeframe that the prosecution claimed, without evidence. Xie’s alibi covered that time frame.

For another example, the judge in the murder trial of Sue Neill-Fraser, Alan Blow (now Chief Justice of Tasmania) reinforced the prosecutor’s speculation about a hypothetical murder weapon – a wrench – several times in his summing up:

So if an assailant hits someone on the head with a wrench, for example, and if that sort of bodily harm that’s intended, a head injury caused with a wrench, is something that could well cause death and the assailant knows that that’s the sort of bodily harm that could well cause death then that’s murder. For example, if the assailant thinks, ‘I don’t care whether he dies or not, I’m so angry with him I’m going to hit him on the head with this wrench and that’ll really hurt him’, then that can amount to murder.

There was no wrench presented in evidence. Indeed, there was no body on which injuries could be examined, yet the prosecutor even speculated about what injuries the victim may have had. This circumstantial case even features speculation that Neil-Fraser was at the crime scene at the relevant time.

The main witnesses for the prosecution were the investigator, Detective Inspector Jacob, and the expert witness, Assoc. Professor Rod Cross. Cross had worked closely with Jacob and the DPP’s office to show that Wood was capable of throwing Byrne over the cliff, in ‘a spear throw’. Whether or not his experiments proved this or not (I wasn’t convinced) it did not prove that he did. At the appeal the bench ruled that this was impermissible speculation. But of course by then, Wood had been convicted and jailed. And was paying for the appeal from already reduced resources. 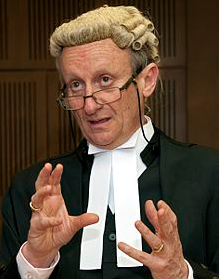 NOTE:
An observer with intimate knowledge of the Wood case, who wishes to remain anonymous, has provided the following note: “Someone in the Gordon Wood case made an extraordinary error which strikes me as malicious by changing the date of a 2003 photo (of the Gap) to 1995. The vegetation difference changed the evidence in favour of the prosecution.“Could that be accidental? Surely not. Malicious? I think so. Justice Fullerton in about 500 pages of judgement seems to omit the most heinous or malicious things done to Gordon Wood, such as that example.  I do not think it matters who did the malicious date change – someone did, so the State of NSW maliciously prosecuted Wood.

“By erroneously dividing the tort into individuals and treating each individual as a separate entity, I think she has found a clever but wrong way to let the State of NSW escape its responsibilities in this case. Sure, the definition of malice in NSW law might allow her to rule against Gordon Wood, but she could equally well have concluded that Tedeschi is so experienced that malice was more likely than a series of unknowing almost innocent mistakes by our most esteemed and experienced prosecutor.”

Speculation in trials has bad consequences.

For more information on these cases, please see our various articles by choosing from the menu on the right.