In the long-running matter of Sue Neill-Fraser’s 2010 murder conviction, some people still rely on the jury’s guilty verdict; but a jury’s verdict is (usually) based on the facts and evidence presented to them. What might have convinced this jury? Why is the verdict unsafe?

In the wake of the second appeal, announced on November 30, 2021, having been dismissed 2:1 by the Tasmanian Court of Appeal, a new flurry of opinions swirled in the public square. Several Letters to the Editor were  published in The Mercury over two consecutive days, and while the majority were troubled and/or angry at the dismissal, others cited the jury decision as definite proof of her guilt.

A good example is the following (December 8, 2021): “SUE Neill-Fraser was convicted of murder neither by the police nor the Crown prosecution. She was convicted by the evidence presented and not by that which was not. She was found guilty unanimously by a properly instructed jury of her peers. As has been pointed out, this case has possibly been the most heavily scrutinised in Tasmanian legal history with even a new law passed to that end and no flaw or impropriety identified in its conduct. That evidence is circumstantial does not negate its probative value, a fact lost it seems on some. Sadly in this ongoing saga scant attention has been paid to the real victim and his family’s feelings.     Nick Watt Riverside”

It is understandable that the public would wish to rely on jury verdicts (we all would), but as has been the historic experience, jury verdicts are challenged; the system is geared for that via the appellate process (unsatisfactory and in need of reform as it is). There is nothing worse (for the accused and their family, for the justice system, for the public interest), than a wrongful conviction, especially where the penalties are so severe – like a 23-year prison term as in this case.

Much has been published about the case that challenges the verdict, not because the jury got it wrong but precisely because of ‘the evidence presented’ … ‘by the police (and) the Crown prosecution’.

One of the key factors that the jury had to consider in the absence of any primary evidence, was the credibility of the Crown’s case. The case relied on a couple of key circumstantial elements, including, notably, the sighting of a dinghy alongside the Four Winds on the afternoon of Australia Day 2009, when the Crown claimed Sue Neill-Fraser had gone back on board and murdered Bob Chappell. The ‘correct’ description of that dinghy as belonging to Four Winds would support the Crown case. Any other dinghy would tend to sink it (pardon the pun) – and raise the possibility of other persons on the boat – the crime scene – thus sowing reasonable doubt in the jury’s mind about the guilt of the accused.

In the meticulously prepared and legally supported Etter/Selby papers tabled in parliament in August 2021, this evidence is deconstructed and shows that not only was the jury left to believe the Crown’s incorrect version, but so was the defence. The following is an extract from the Etter/Selby papers:

1 It was clear from witness Peter Lorraine’s first statement to police (as noted by Sinnitt, the police officer, who took handwritten notes during the phone call that Lorraine made to police on 27 January 2009) that he did not see the Four Winds yacht or its dinghy (due to both description and distance issues – the Four Winds yacht was 280 metres away from Mr Lorraine’s observation point that was the Derwent Lane Jetty). He saw some other yacht with a dinghy that was, he said, small, 5 feet long, similar to a cockle boat, not a Zodiac, yellow/white, and which had NO outboard motor.

2 Hence, Peter Lorraine’s evidence about sighting the Four Winds‘ dinghy on the Australia Day afternoon was incorrect. He didn’t see any of the Four Winds, its dinghy, or Bob Chappell. He saw another yacht, another dinghy, another person. The notes of his first contact with police make that quite clear. But those notes were not disclosed to the Defence.

3 Peter Lorraine was presented at trial by the prosecution as an independent witness who on Australia Day 2009 saw an old man (CT 1409) and possibly the Four Winds yacht and its dinghy around 5pm. That timing made it possible for the accused Sue Neill-Fraser (SNF) to be on the Four Winds at a time when she claimed she was ashore. It also meant that the victim Bob Chappell was seemingly alive at 5 pm so had not come to grief via the occupants of the grey or different dinghy seen by various other people alongside the Four Winds that same day and around the same time (Conde, Clarke and P36) or in a relevant area in the lead up to Australia Day (Smith – in the leave to appeal hearing on 31 October 2017).

4 Because he was independent, and because the Defence had no inkling as to the extent of the misleading nature of his evidence (particularly given disclosed and incomplete information on the Police Investigation Log), they accepted him and his evidence as credible.  Moreover, they accepted him as more credible than their client who has always said that she had left the Four Winds earlier and left the dinghy much earlier, probably around 3 pm (having spent about an hour on the boat – CT 1157). Here is what Defence counsel said in his closing to the jury (CT 1442 – see also CT 882 in absence of jury): We know that on one view, Mr Lorraine, that Mr Chappell was sighted at about five o’clock by him with the grey dinghy behind and whilst Sergeant Conroy didn’t seem to be terribly convinced at the beginning that Mr Lorraine had seen Mr Chappell he seemed to come around to the proposition that that was right, given where the boat was situated, and I would suggest to you that it almost certainly was Mr Bob Chappell at five o’clock. Nobody reported seeing him being on the deck after that. That of course depends on a finding that you make as to whether you accept Mr Lorraine that it was Mr Chappell, I submit to you you could. 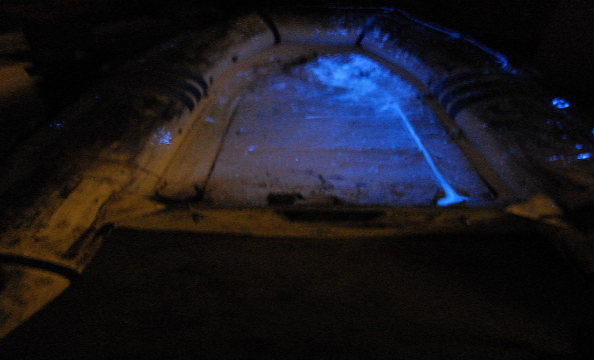 9. In apparent ignorance (based upon his 2017 admission) Mr Ellis SC tendered in the Crown case this highly prejudicial photo with no probative value. There’s such a wonderful glow. It must mean something, it must be relevant: ah blood, Bob’s blood. There is no other basis for its tender.

As Ellis SC and the witness said in front of the jury at T639:

As we go through it and could you come perhaps to photograph 21, and what does that show?……This is a photograph that was taken to show the areas that glowed with the luminol screening test for blood.

It is well known by now that the prosecution speculated as to how Neill-Fraser must have murdered Chappell, her beloved partner of 18 years, on board their recently purchased yacht. (She was also accused of trying to sink it as part of her plan to acquire all of Chappell’s assets, an irrational contradiction of the accusation.)

1297 Ellis: “It was a wrench, wasn’t it, or a similar sort of tool with which you struck Mr Chappell from behind and killed him…”

Normally, the trial judge would immediately disallow such speculation, with or without objections from defence. In this case, there wasn’t and he didn’t. Indeed, the judge made prejudicial references to a wrench several times in his summing up, as if accepting the Crown’s speculation.

A malicious witness, Phillip Triffett, and his then partner Maria Hanson, were instrumental in compromising the police investigation into the disappearance of Bob Chappell on Australia Day 2009 – and poisoning it. It is ironic that those who want to protect Sue Neill-Fraser’s murder conviction should refer to her ‘many lies’ as if that proved her guilt (even if it were true), considering it was Triffett who did all the lying. (In a sworn affidavit, old family friend Bob Martyn writes: “I don’t believe that Sue told police that she had been to Bunnings to hide where she had really been. It was common for Sue to get confused and mistake the day that she went and so this was consistent with her normal behaviour.”)

At the trial, then DPP Tim Ellis SC, referred to Triffett’s evidence as the ‘sealer’ of the case. The police did not disclose before the trial that Triffett had approached them asking if his evidence against Neill-Fraser would be helpful in his own matters due to go to court. That only became known during the trial through an anonymous caller who alerted defence counsel. This ‘sealer’ evidence consisted of Triffett’s fanciful claim that a decade earlier when they were still on friendly terms, Sue talked to him about murdering her brother and Bob, too. It’s not as though mild mannered Sue moved in criminal circles, but the police took it seriously. As did the prosecution.

Missing from this overview is the detailed story of Meaghan Vass and her DNA found on Four Winds. The prosecution dismissed that evidence as a red herring, arguing that it was ‘probably’ taken on board on a policeman’s shoe. That question was the central issue in the latest appeal.

Two of the judges dismissed the appeal but in his dissenting remarks, Justice Estcourt said the jury “acting reasonably, might have acquitted the appellant had the fresh evidence been before it at the trial.” That fresh evidence was expert testimony that questions the prosecution’s claim of the DNA being a red herring.

Expectations of safety in a jury verdict are not always justified …

11 Responses to Why Sue Neill-Fraser jury verdict is unsafe